Australia's chief medical officer is trying to allay concerns the outbreak of the deadly Ebola virus in West Africa may spread to Australia.

The World Health Organisation (WHO) has said the epidemic constitutes an international public health emergency, adding that the virus could continue spreading for months. 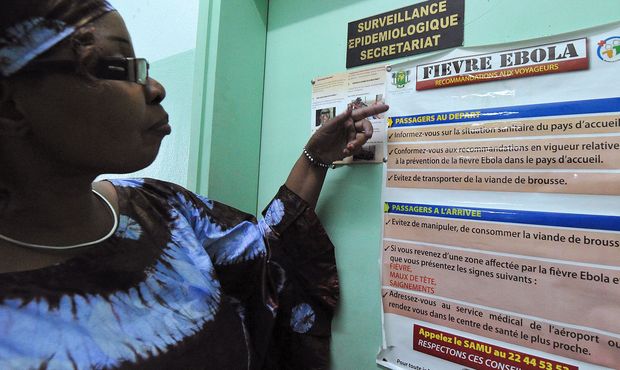 A woman reads Ebola warnings for travellers on the Ivory Coast as the WHO declares the killer virus an international health emergency. Photo: AFP

The latest WHO figures on Friday showed the worsening toll. Some 1779 people are known to have been infected and 961 people reported dead in the most severe outbreak in the 40 years since it was first identified in humans.

Australian chief medical officer Professor Chris Baggoley, who was on the WHO's expert committee, said the declaration was designed to bolster international solidarity to fight the outbreak.

Professor Baggoley said airports in Australia will now carry warnings and advice for people that have spent time in Africa in a bid to stop people bringing the virus into Australia.

"We'll be putting up banners advising people who are coming to us from Africa - particularly those who have spent time in West Africa in the 21 days before they come back to us - reminding them of Ebola and of the symptoms and what to do if they've got any concerns," he said.

"We do know that there are announcements given on planes before they land for people who are asked if they've got a fever or sweats or chills to alert a cabin crew member.

"I think you'll find that more people will be paying attention to those messages, and those aircraft that may have passengers coming from Africa, too, will ensure that there's proper emphasis on those messages being given.

"We'll also have a process whereby those returning from West Africa will be asked about their health and just be given specific advice."

Nigeria on Friday declared a national emergency, following similar declarations in Sierra Leone and Liberia, as the region's healthcare systems struggled to cope with the advance of one of the deadliest diseases known to man.

President Goodluck Jonathan called on the population to avoid large gatherings in order to prevent the spread of the virus.

"Religious and political groups, spiritual healing centres, families, associations and other bodies should ... discourage gatherings and activities that may unwittingly promote close contact with infected persons or place others at risk," his office said in a statement.

Among measures to be undertaken include the setting up of additional isolation centres, screening at borders and contact tracing.

Mr Jonathan also warned against the movement of any corpses in the country.

Nigeria said on Friday it had identified two new cases of Ebola, bringing the total number of confirmed infections in Africa's largest country to nine, including two deaths.

Mr Jonathan appealed to authorities of public and private schools to consider the option of extending current school holiday "until such a time when national reassessment of the level of the Ebola is conducted".

He said that medical workers should regard his declaration of the national emergency as a patriotic call to duty and service, the statement said.