The Pentagon says drones and Navy fighter jets have hit targets near the Iraqi city of Irbil where Sunni jihadists are attacking Kurdish forces defending the city.

The air strikes are the first aggressive American military action in Iraq since the last US troops withdrew two-and-a-half years ago. 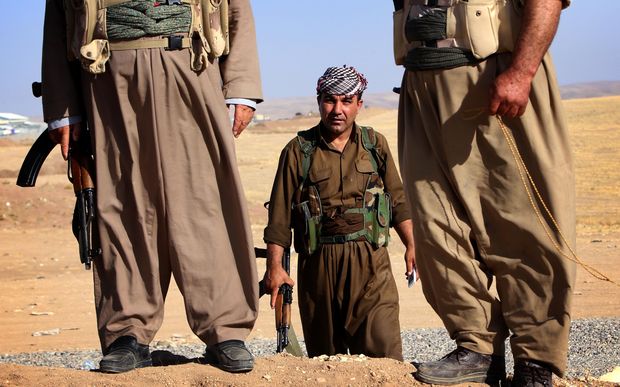 The Islamic State (IS) group of Sunni Muslims has taken control of swathes of Iraq and Syria.

Tens of thousands of people from minority groups have fled their homes due to the militants' advance.

Back in June, when ISIS took over Mosul, Prime Minister Nouri Maliki begged for American air strikes to halt the militants' advance - but Washington did not intervene.

Analysts say the relentless advance of IS fighters, together with the continuing failure of Iraqi politicians to agree on a new government after an election in April, may have swayed the American President Barack Obama into deciding to act now.

In the second wave of strikes, US drones destroyed a mortar position and killed a group of militants, the BBC reported.

Earlier on Friday, two 500-pound (227kg) bombs were dropped on IS artillery, which was being used against Kurdish forces defending Irbil.

Marie Harf, a spokeswoman for the US State Department, told the BBC that the immediate goal of the strikes was to "prevent the advance" of IS towards Irbil.

"Then longer term obviously we want to work to provide some time and space for the Kurdish forces to get back on their feet and fight this threat on their own," she said.

"There's not really a long-term US military solution here."

US Secretary of State John Kerry said the world needed to wake up to the threat posed by the IS group.

He said its "campaign of terror against the innocent, including the Yazidi and Christian minorities" showed "all the warning signs of genocide". 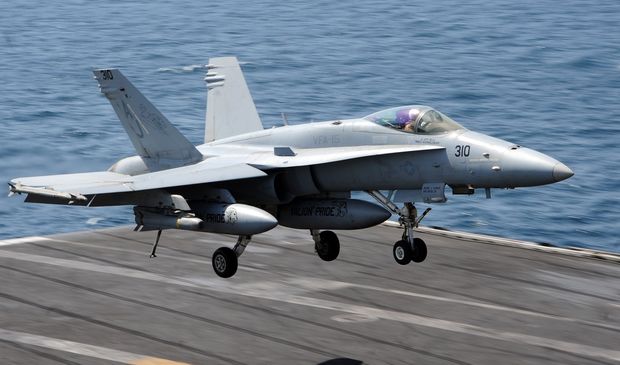 This US Navy handout photo shows an F/A-18C Hornet as it prepares to land on the flight deck of the aircraft carrier USS George H.W. Bush in the Gulf. Photo: AFP / US NAVY / JOSHUA CARD / HANDOUT

The militants' advance has also forced tens of thousands of Yazidis to escape to a nearby mountain.

Late on Thursday, US military planes carried out air drops of food and water to help the displaced Yazidis.

Ministry spokesman Kamil Amin said some were being held in schools in Iraq's second largest city, Mosul. He said the information had come from the captives' families.

Yazidis are a secretive group whose religion incorporates elements of many faiths, including Zoroastrianism, and many Muslims and other groups view Yazidis as devil worshippers. There are estimated to be around 500,000 Yazidis, most of them living on Iraq's Nineveh plains.