United States president Barack Obama has authorised targeted air strikes against Islamic militants in northern Iraq to prevent the slaughter of religious minorities or threats to US interests. 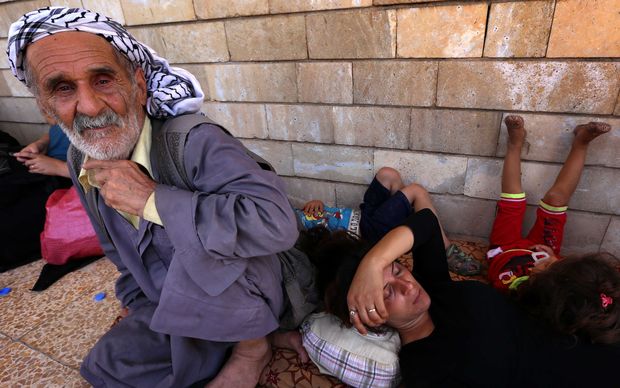 Iraqi Christians who fled violence in Nineveh, rest at the Saint-Joseph church in the Kurdish city of Arbil. Photo: AFP 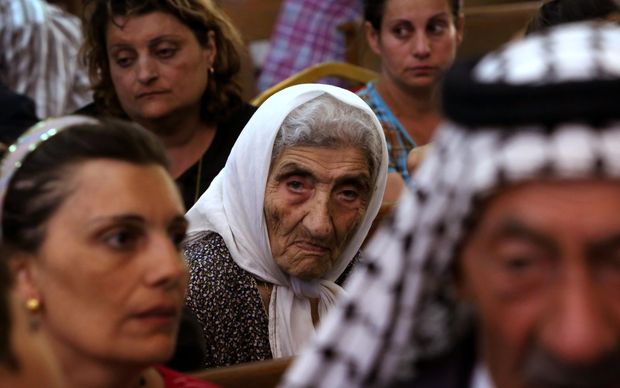 The US has already made humanitarian air drops to Iraqis under threat from Islamic State (IS) fighters, the BBC reports.

The Sunni Muslim group, formerly known as Isis, has been gaining ground in northern Iraq and Syria for several months and has seized Qaraqosh, Iraq's biggest Christian town, forcing locals to flee.

The United Nations has estimated that about 200,000 civilians have been displaced from the town of Sinjar and about 50,000 members of the Yazidi religious minority community are thought to have been trapped on Mount Sinjar.

The Yazidis face starvation and dehydration if they remain on the mountain, and slaughter at the hands of the IS if they flee, officials have warned.

Speaking at the White House, Mr Obama said US military aircraft had dropped food and water to Mount Sinjar. He said the Iraqi government had requested assistance and the US would act "carefully and responsibly, to prevent a potential act of genocide".

He said US air strikes would target IS fighters if they threaten Baghdad or move towards the Kurdish capital of Irbil, where there is a significant presence of US diplomats and military advisers.

Early the UN Security Council met to discuss the situation in Iraq.

UN Secretary-General Ban Ki-moon said he was "deeply appalled" by the situation. About 50,000 Yazidis are thought to have been trapped in the mountains after fleeing the town of Sinjar - although the UN says some of them have now been rescued.

Tens of thousands of religious minorities have been forced to flee since IS launched its onslaught. The group has said it has created an Islamic state in the territory it controls. 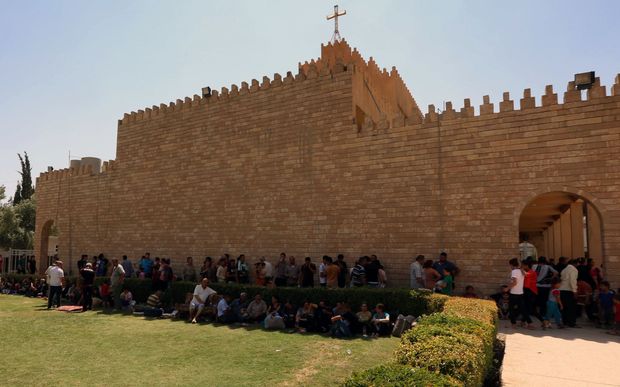 Iraqi Christians who fled the violence in the village of Qaraqush.rest at the Saint-Joseph church in Arbil. Photo: AFP

As many as 100,000 people are believed to be fleeing toward the autonomous Kurdistan Region.

Pope Francis has made an impassioned appeal to the international community to do much more to address the crisis. A Vatican statement said the Pope had appealed for "all necessary help" to be given to those forced to flee their homes, "whose fate depends entirely on the solidarity of others".

Kurdish forces, known as the Peshmerga, have been fighting the IS militants' advance for weeks. The Peshmerga's commander in Qaraqosh reportedly told the town's archbishop late on Wednesday that the forces were abandoning their posts.

Several senior clergymen in Nineveh confirmed the town had fallen.

"It's a catastrophe, a tragic situation: tens of thousands of terrified people are being displaced as we speak," Joseph Thomas, the Chaldean archbishop of the northern city of Kirkuk, said.

Eyewitnesses in Qaraqosh said IS militants were taking down crosses in churches and burning religious manuscripts.

The town - referred to as Iraq's Christian capital - is located 30km south-east of the city of Mosul, which was captured by IS in June.

In July, hundreds of Christian families fled Mosul after the Islamist rebels gave them an ultimatum to convert to Islam, pay a special tax or be executed.

Iraq is home to one of the world's most ancient Christian communities, but numbers have dwindled amid growing sectarian violence since the US-led invasion in 2003.