Russian President Vladimir Putin has moved to ban or restrict imports of food and agricultural products from countries that have imposed sanctions on Russia over its actions in Ukraine.

In Moscow's biggest economic response to Western sanctions, Mr Putin on Wednesday ordered his government to bring in the measures for one year.

In developments in Ukraine, heavy clashes were reported on the outskirts of Donetsk, the main rebel-held city in the east. 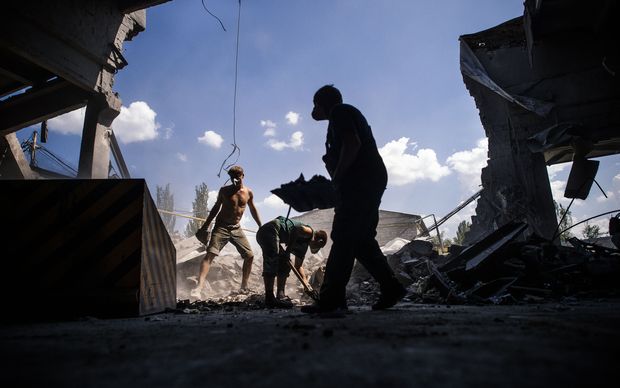 In the main rebel stronghold of Donetsk, men clean debris after what was said to to be an air strike. Photo: AFP

Russia's sanction decree did not specify which countries would be affected by the new measures but the EU and US recently tightened sanctions on Russia, with Brussels extending them from individuals to sectors of the economy.

Last week Russia banned most agricultural imports from Poland on grounds of public health in what was seen as a thinly veiled retaliation for Poland's advocacy of tough action over Ukraine.

Russia buys fruit and vegetables from the EU worth an annual €2 billion and food and agricultural products from the US worth about €1 billion, the BBC reports.

Russia was first subjected to sanctions after annexing Crimea in March and has been accused of fomenting the armed rebellion in Ukraine's eastern regions.

Brussels hardened its sanctions at the end of July, amid growing anger over the downing of a Malaysia Airlines jet over eastern Ukraine, apparently by a missile, with the loss of all 298 passengers and crew aboard.