Rescue workers in China are struggling to reach the epicentre of a 6.1-magnitude earthquake that struck in Yunnan province on Sunday, killing at least 381 people.

The government has sent 2500 soldiers to the province with life-detection instruments and digging equipment to help with the rescue effort. Its state news agency says 12,000 homes have been destroyed and many thousands more are damaged in the mountainous area. 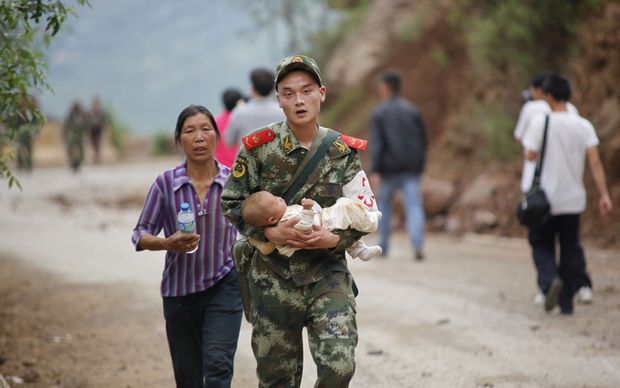 A rescuer carries a baby after a deadly earthquake hit in China's Yunnan province. Photo: AFP

State broadcaster CCTV said the earthquake was the strongest to hit the mountainous province in 14 years. One man said two-thirds of homes have been destroyed in his village, the BBC reports.

President Xi Jinping called for "all-out efforts" to find survivors as he dispatched soldiers to the area. They will join more than 300 police and firefighters from Zhaotong and about 400 emergency workers and sniffer dogs from across Yunnan province in the rescue operation.

The USGS said the quake struck at a depth of about 10km in a remote mountainous area in Yunnan province. The tremor was also felt in the neighbouring provinces of Guizhou and Sichuan, the BBC reports.

Xinhua said about 12,000 homes had collapsed in Ludian, a county of some 439,000 people, north-east of Yunnan province's capital, Kunming.

All of the casualties reported so far are in Qiaojia County of the Zhaotong region, which appeared to be the hardest hit.

Ma Liya, a resident of Zhaotong, told Xinhua the streets there were like "battlefield after bombardment", adding her neighbour's house, a new two-storey building, had collapsed.

The news agency said the epicentre of the earthquake was in Longtoushan, in Yunnan's Ludian county. Chen Guoyong, the head of Longtoushan township, told Xinhua that many houses had fallen and rescuers had been sent to the epicentre.

Many people rushed out of buildings onto the street after the quake hit, electricity supplies were cut and at least one school collapsed. Communications have also been seriously affected.

South-west China lies in an area that is prone to earthquakes; an earthquake in Sichuan in 2008 killed tens of thousands of people, while a 7.7 quake in 1970 killed at least 15,000 people.