The Jihadist group Islamic State has released a video showing its militants killing dozens of captives in Iraq.

The video warns Iraqi soldiers they face the same fate if they fight back.

The footage shows a group of terrified young men in civilian clothes is hustled to the banks of a river where a masked man with a pistol kills each with one shot, the BBC reports. Another pushes or kicks them into the water.

Iraq's army unravelled when the Sunni insurgents staged a lightning advance through northern towns and cities, building on territory their comrades captured earlier in the west of the country.

Thousands of soldiers fled, prompting Iraq's top cleric to call on compatriots to take up arms against the radical faction that aims to march on the capital Baghdad.

On Tuesday, Islamic State militants blew up a strategic bridge connecting Samarra to the town of Tikrit to the north, severing the main route and a tunnel beneath it that was used by Iraqi military forces, Reuters cited a senior local police official as saying.

Iraqi government troops have tried but failed to recapture Tikrit from the insurgents.

Shi'ite militias now rival the government army in their ability to confront the Sunni insurgents. 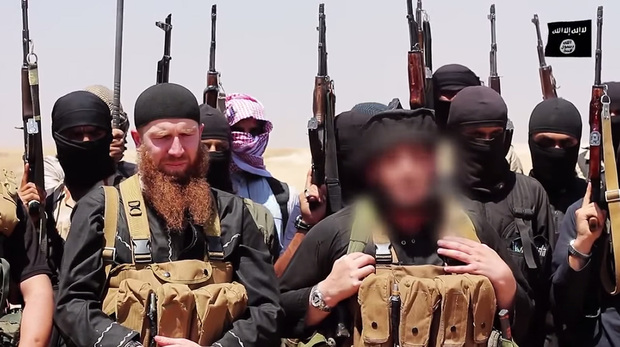 Australia has issued arrest warrants for a pair of Australian citizens believed to be fighting in Syria's civil war, after images emerged of the two holding the severed heads of Syrian soldiers.

The Australian Federal Police counter-terrorism chief Neil Gaughan has confirmed that warrants have been issued for Khaled Sharrouf and Mohamed Elomar, on terrorism offences.

Mr Gaughan says the men will be taken into custody whenever they next set foot on Australian soil.