The Israeli bombardment has left large parts of Gaza in ruins. The UN says its resources are at breaking point, with 200,000 people sheltering in its buildings and Israel will soon have to accept responsibility for the displaced.

Concerns have also been raised of the long-term effects of the conflict which began on 8 July. Officials in Gaza say the damaged power plant that supplies most of the territory's energy may be out of action for a year. 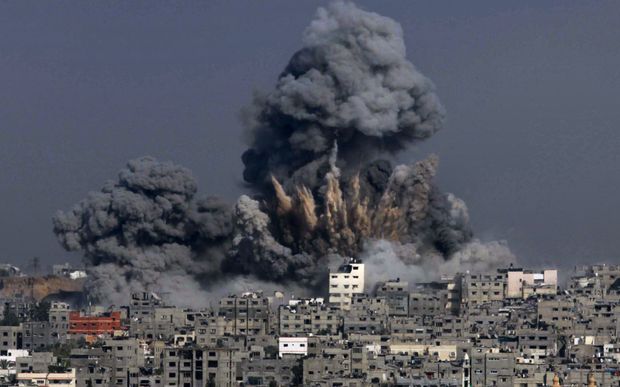 The military wing of Hamas has rejected a truce with Israel following one of the deadliest days of the three-week Israeli offensive in Gaza, with more than 100 Palestinians reported killed on Tuesday.

In the southern city of Khan Yunis, a single strike killed nine members of the same family, including one child, according to an emergency services spokesman.

In an audio message broadcast on Hamas TV, the leader of the al-Qassam brigades, Mohammad Deif, said the group would only agree to a ceasefire if the blockade was lifted. But the blockade has crushed the local economy and has stopped many Palestinians from leaving the territory, the BBC reports.

Early on Wednesday, shelling on a UN school in Gaza's Jabaliya refugee camp killed at least 16 people, according to medical sources. A UN official confirmed the attack which also injured 90 people.

The shelling lifted the toll of Palestinian dead to just over 1250, while Israel says 55 of its people have been killed since 8 July. Most of the Palestinian deaths have been civilians, and 6700 have also been injured, according to the Gaza health ministry.

Despite growing international pressure on both Israel and Hamas to end the fight, neither side appears willing to back down. An Israeli military spokesman said the strikes signalled a "gradual increase in the pressure" on Hamas.

Palestinian factions are expected to meet in Cairo on Wednesday to discuss a possible humanitarian ceasefire. Egyptian mediators are reportedly revising an earlier truce proposal that was accepted by Israel but not Hamas.

Gazans get power from just one local plant, as well as some supplies from Israel and Egypt. On Tuesday, a huge plume of smoke rose over it after one of its fuel tanks was reportedly set alight by Israeli tank shells, and the facility was forced to shut down. 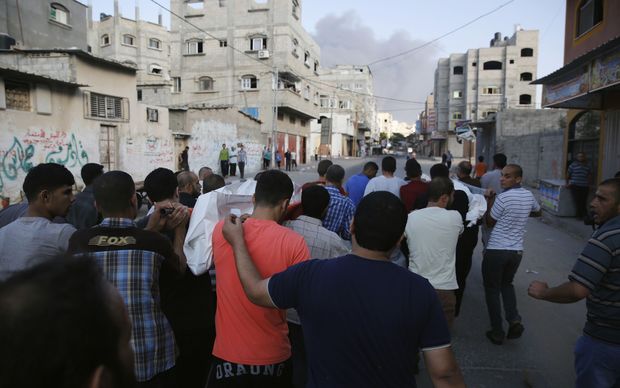 Palestinians carry the bodies of two men as smoke rises over Beit Lahiya in the northern Gaza Strip. Photo: REUTERS