Heavy clashes between the Libyan army and Islamist militias have left at least 38 people dead in the eastern city of Benghazi.

Militias controlling large parts of the country are behind Libya's worst violence since the 2011 uprising that toppled Colonel Muammar Gaddafi.

On Sunday, France and Germany joined the United States and Britain in advising their nationals in Libya to leave immediately. 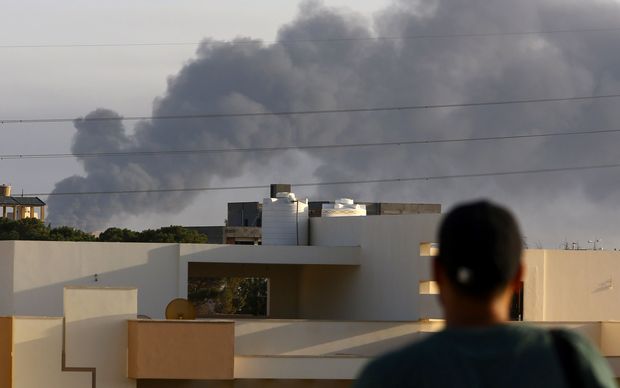 In the past two weeks, fighting in Libya's two largest cities Tripoli and Benghazi has been intense, deadly and show few signs of abating, the BBC reports.

In Benghazi, the fighting involved militants attacking troops in the centre of the city. A coalition of forces including the army led by rogue former general Khalifa Haftar say they aim to dislodge Islamist militants from the city.

A week of fighting in the capital Tripoli, near the airport, has left 97 people dead and 404 injured.

Rival Libyan militias have been locked in battle at Libya's main airport in the south of Tripoli since last week, forcing the airport to shut.

Members of the Islamist Libya Revolutionaries Operations Room (LROR) are trying to seize control of the facility which has been in the hands of the Zintan militia since the overthrow of Colonel Gaddafi.

Libyan government officials warned of the possibility of a break-up of the country if clashes over Tripoli airport continue.

On Saturday, the US evacuated its embassy in Tripoli, citing a "real risk" because of the fighting. Turkey has also withdrawn some 700 members of staff from Libya. Earlier this week, the UN also announced it was withdrawing all its staff from Libya.

The government has been unable to disarm the numerous armed groups that took part in the 2011 uprising and which have divided the country.