The wreck of the Costa Concordia has arrived off the northern Italian city of Genoa, where it will be broken up for scrap.

The cruise liner ran aground and sank near the Tuscan island of Giglio two-and-a-half years ago, killing 32 people.

Reuters reports it was lifted off rocks and refloated last week, following a complex operation that required months of preparation. 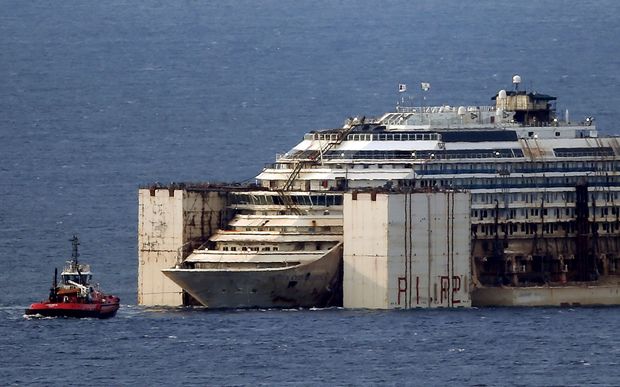 The refloated wreck of the Costa Concordia. Photo: AFP

After a four-day voyage supported on buoyancy tanks and towed by two tugs, port pilots began manoeuvring the 114,500-tonne hulk ready for docking.

The arrival in the industrial port of Voltri, just outside the main harbour in Genoa, will cap one of the largest and most complex maritime salvages ever attempted, expected to cost Carnival Corp, the owner of the Costa Concordia, and its insurers more than 1.5 billion euros.

A consortium led by Italian engineering group Saipem and Genoa-based San Giorgio del Porto will break up the wreck in an operation which sources close to the project have said could cost 100 million euros and take up to two years.

The Costa Concordia, a huge floating hotel as long as three football pitches laid end to end with 13 passenger decks, was carrying some 4000 passengers and crew when it went down shortly after the start of a Mediterranean cruise.

The ship's captain, Francesco Schettino, is on trial for causing the shipwreck, which ended in a chaotic night-time evacuation during which 32 lives were lost. The body of one crew member lost during the accident has still not been recovered.