The United Nations Security Council has called for an immediate ceasefire between Israel and Palestinian militants in Gaza.

It comes as US Secretary of State John Kerry heads to Cairo for talks on the crisis amid a mounting death toll. 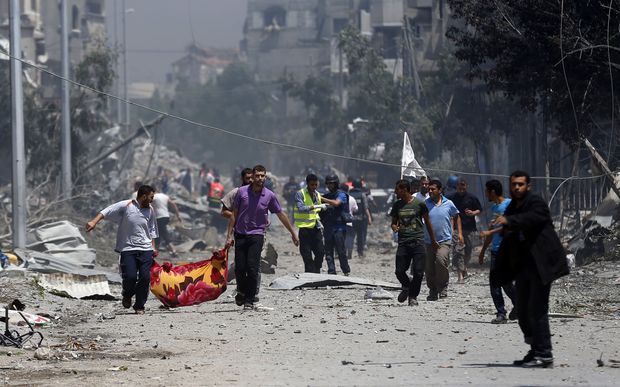 Scores were killed in the bloodiest fighting of a near two-week offensive. Photo: AFP

Over 500 Palestinians, mainly civilians, have been killed since the Israeli offensive began two weeks ago, Gaza's health ministry says.

Twenty Israelis - including 18 soldiers - have died, Israel says, as it seeks to end rocket fire on the country.

On Sunday, Gaza saw its deadliest day since the start of Israel's Operation Protective Edge, with 13 Israeli soldiers and more than 100 Palestinians killed, the BBC reports.

Israel says it has killed at least 120 militants since the ground offensive began on Thursday night.

UN Secretary-General Ban Ki-moon said Israel's operations in the densely populated Shejaiya suburb of Gaza City were atrocious, where over 70 Palestinians have been killed by shelling.

However, the 15-member council instead issued a statement to the press, with Rwanda's UN ambassador calling for "an immediate cessation of hostilities".

Earlier, US President Barack Obama expressed concern over the loss of life in Gaza in a call to Israeli Prime Minister Benjamin Netanyahu.

Mr Obama condemned attacks by Hamas on Israel, and raised serious concern about the growing number of casualties, including increasing Palestinian civilian deaths in Gaza and the loss of Israeli soldiers, the White House said.

Palestinian President Mahmoud Abbas accused Israel of carrying out a massacre in Shejaiya and declared three days of mourning.

Residents fled Sunday's fighting along streets strewn with bodies and rubble, many of them taking shelter in Gaza's Shifa hospital. A humanitarian ceasefire agreed by Israel and Hamas in the Shejaiya district to allow ambulances to reach the dead and wounded lasted only an hour.

Israel's army said it was targeting militants from Gaza's dominant Hamas group whom it alleged had fired rockets from the Gaza neighbourhood and built tunnels and command centres there. The army said it had warned locals two days earlier to leave.

Israeli Prime Minister Benjamin Netanyahu, who has accused Hamas of using non-combatants as human shields, told CNN the army was concentrating on military targets. "Unfortunately there are civilian casualties which we regret and don't seek."

Palestinian fighters kept up their rocket fire on Israel on Sunday. Sirens sounded in southern Israeli towns and in the Tel Aviv metropolitan area. There were no reports of casualties.