Western countries have demanded that Russia put pressure on Ukrainian rebels to allow unhindered access to the site of Thursday's Malaysia Airlines crash.

Dutch Prime Minister Mark Rutte said he had told Russian President Vladimir Putin that time was "running out" to show he could help. Most crash victims were Dutch.

The US and Britain also told Russia full access to the area was needed.

International observers have had their movements restricted by pro-Russia militiamen who control the crash site. 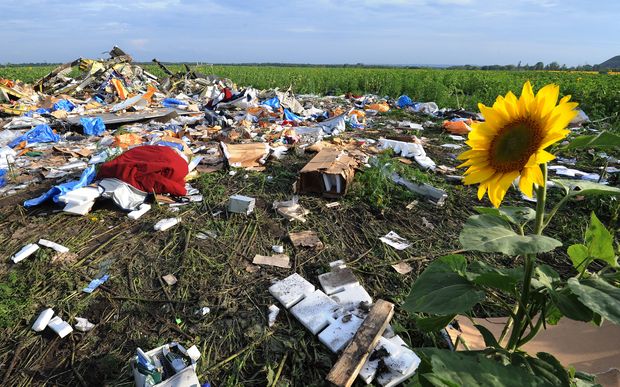 Debris from the downed Malaysian Airliner in sunflower field near the village of Rassipnoe in Ukraine. Photo: AFP

The US said it was "deeply concerned" at the limited access at the crash site.

"It is critical that there be a full, credible, and unimpeded international investigation as quickly as possible," said a statement from the State Department in Washington.

Both Ukraine and the pro-Russian rebels have accused each other of shooting down the Boeing 777, which was flying from Amsterdam to Kuala Lumpur.

Flight MH17 was reportedly hit by a missile over a rebel-held area in Donetsk region on Thursday. All 298 people on board died.

Ukraine has accused militiamen at the site of the Malaysia Airlines crash of trying to destroy evidence of an "international crime".

In a news conference on Saturday, Mr Rutte said he had had an "intense" phone call with Mr Putin.

"I told him 'Time is running out for you to show the world that you have good intentions','' Mr Rutte said.

He added that Dutch people were "furious" at pictures of bodies being carried across the open country, and called on the Russian president "to show that he will do what is expected of him and will exert his influence".

The BBC correspondent at the site said he saw bodies being removed by emergency workers, but it was not clear where they were being taken, or whether the workers were loyal to the rebels or the Kiev government. 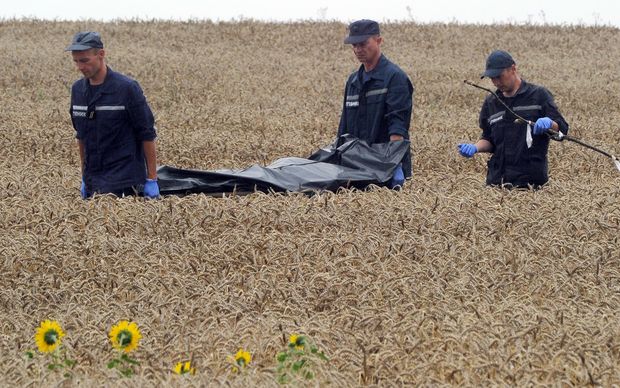 Ukrainian rescue workers carry the body of a victim on a stretcher through a wheat field at the site of the crash. Photo: AFP

At the main site the bodies were without covering. Some lay alone. Others were grouped together amid the twisted metal, the bags and cases, the child's playing cards, the guide books, the laptop computer, the duty free whiskey bottle, the woman's hat.

Monitors from the Organization for Security and Co-operation in Europe (OSCE) are at the crash site.

OSCE spokesman Michael Bociurkiw said access had improved compared to Friday and that the monitors were seeing parts of the terrain they had not seen before, but that their movements were still being restricted.

The monitors are there to observe the site ahead of the arrival of international investigators.

The ABC reports that the United Nations Security Council is considering Australia's draft resolution calling for an international investigation into the crash.

Thirty-seven of those killed were Australian citizens and residents.

Australia's Foreign Minister Julie Bishop is flying to New York to lobby the United Nations for a binding resolution to set up an inquiry into what happened.

Australia's team at the UN has been working on the draft text which condemns in the strongest terms the shooting down of the Malaysia Airlines flight and demands that those responsible be held to account.

It also calls on all states in the region to cooperate fully with an international investigation and that armed groups provide safe and unfettered access to the crash site.