Israel's security cabinet has accepted an Egyptian ceasefire proposal, a government spokesperson said on Tuesday, after a week of the deadliest violence in and around Gaza in years that has killed nearly 200 Palestinians.

"The cabinet has decided to accept the Egyptian initiative for a ceasefire starting 9am today," Ofir Gendelman, a spokesperson for Prime Minister Benjamin Netanyahu, said on Twitter. 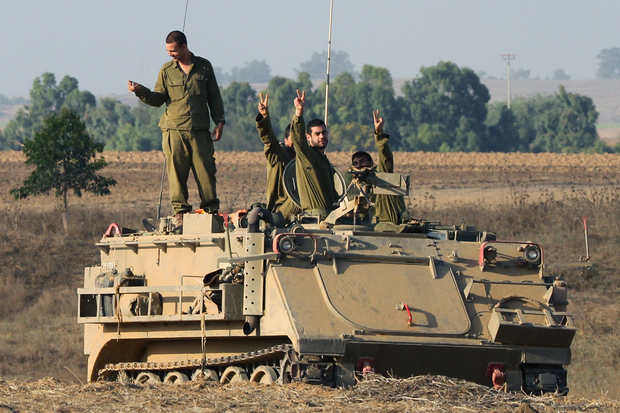 Israeli soldiers flash the sign for victory at an army deployment area near Israel's border with the Gaza Strip. Photo: AFP

Ministers had begun meeting early in the day to consider the Egyptian proposal for a ceasefire to start immediately, AFP reports.

Army radio said that there had been no parallel acceptance of the initiative by Hamas, the Palestinian Islamist movement that controls the Gaza Strip.

There were no immediate reports of rocket fire at Israel after the deadline, with the army saying only two rockets had struck the south overnight, and another two shot were shot down just 15 minutes before the Egyptian initiative came into force.

Overnight, Hamas spokesman Fawzi Barhum said there would be no truce without a fully fledged deal to end hostilities. "In times of war, you don't cease fire and then negotiate," he said.

Hamas' armed wing, the Ezzedine al-Qassam Brigades, also rejected the proposal as a "surrender", pledging to "intensify" its attacks on Israel.

Palestinian officials say at least 185 people in Gaza have been killed by Israeli air strikes since the offensive began on 8 July. The United Nations estimates that over three-quarters of these were civilians, the BBC reports.

Israel says nearly 1000 rockets have been fired from Gaza during that time. No Israelis have been killed, although several have been injured.