The shelling by militia of Tripoli airport destroyed 90 percent of planes parked there and heavy fighting between armed groups has prompted the United Nations to pull its staff out of Libya.

At least 15 people have been killed in clashes in Tripoli and the eastern city of Benghazi since Sunday. A spokesperson said the government has studied the possibility of bringing international forces in to enhance security. 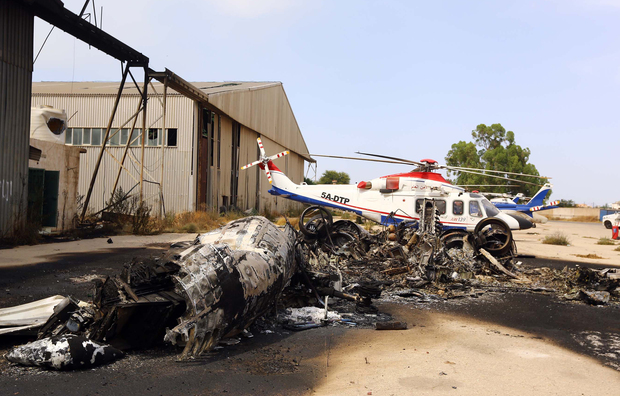 Three years after the fall of Muammar Gaddafi, Libya has slipped deeper into chaos with its weak government and new army unable to control brigades of former rebel fighters and militias who often battle for political and economic power.

The government says it is considering asking for international help to end fighting between the rival militia groups.

Two soldiers were killed and a number of planes damaged when a militia shelled Tripoli airport on Monday, a Libyan soldier told Reuters.

"Several planes and cars belonging to citizens were hit," said Abdel Rahman, a soldier in a unit protecting the airport. A hall used by customs controls had also been hit.

Seven people were killed in Tripoli on Sunday in the worst fighting for six months in the capital, where rival militias have been fighting for control of the airport.

Security and medical sources said at least six people had been killed and 25 wounded in Benghazi in heavy fighting between security forces and rival militias since late Sunday.

The UN mission in Libya said the closure of Tripoli airport and the deteriorating security situation made it impossible for it to operate.

Western powers fear chaos in the North African nation will allow arms and militants to flow across its borders. The south of the vast desert country has become a haven for Islamist militants kicked out of Mali by French forces earlier this year.