Tommy Ramone, the last surviving original member of the American punk band the Ramones, has died at the age of 65. 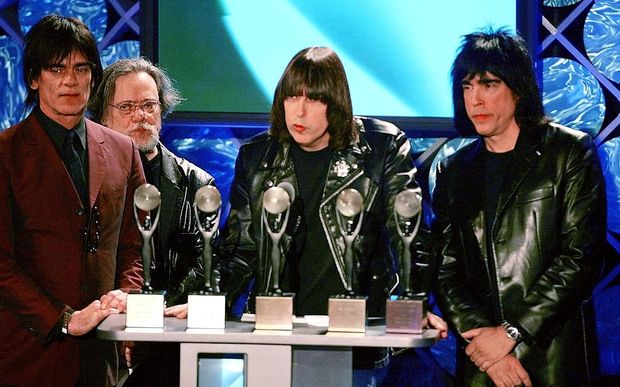 The Ramones: from left Dee Dee, Tommy, Johnny and Marky at the 2002 Rock and Roll Hall of Fame ceremony. Joey died in 2001. Photo: AFP

The New York band, with mops of long hair, black leather jackets, torn jeans and sneakers, had limited chart success but deeply influenced scores of musicians who would go on to form bands such as the Clash, the Sex Pistols, and Nirvana.

They were seen as masters of minimalist, under two-and-a-half minute tunes played at blistering tempo, such as Blitzkrieg Bop, I Wanna be Sedated, and Sheena is a Punk Rocker.

In 2002, The Ramones were inducted into the Rock and Roll Hall of Fame.

Born in Hungary, Ramone immigrated to the US in the 1950s.

He started The Ramones with three friends from a New York high-school in 1974.

Born Erdelyi Tamas, he along with the other band members decided to change their last names to Ramone.

They kicked off their career at the legendary CBGB music club in Manhattan, a hotspot for punk rock and new wave bands.

The act disbanded in 1996 after two decades of relentless touring.