Brazilian authorities say they are planning Rio de Janeiro's largest ever security operation for the World Cup final on Sunday.

More than 25,000 security personnel will be deployed in the city for the tournament's final match between Germany and Argentina, officials say. 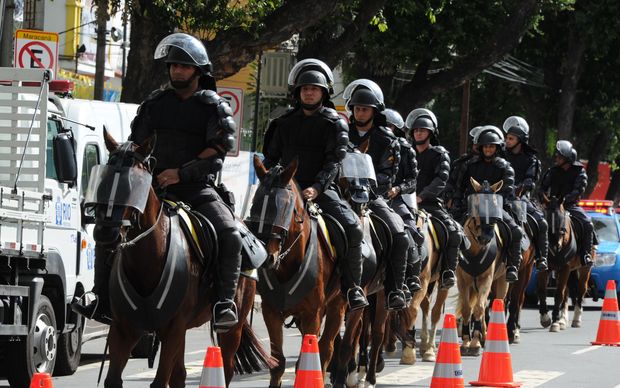 Mounted riot police outside the Maracana stadium ahead of the Russia vs Belgium World Cup match last month. Photo: AFP

About 75,000 fans are expected to watch the final at Rio's Maracana stadium.

Police, soldiers and firefighters will be involved in security operations, and 25 ships are expected to monitor the city's coast.

"This will be the biggest security operation that the city or country has ever seen," senior local government official Jose Mariano Beltrane said.

"We need to ensure that this event goes off like all the other games in the World Cup... I prefer to have a large number of men ready than to be taken by surprise."

The BBC reports the number of security agents is equivalent to a third of all the football fans who will be watching the final inside the stadium.

Security will also be stronger in areas where thousands of Argentinians are gathering and camping out - city authorities expect up to 70,000 fans from the neighbouring country for the final.

Russia will host the next tournament, in 2018.

The tournament's third-place playoff - between hosts Brazil and the Netherlands - takes place on Saturday evening in the capital Brasilia.