Israel is pressing on with punishing aerial bombardments on Gaza for a third day. At least 70 people have been killed so far and United Nations Secretary-General Ban Ki-Moon warns the situation is perilous.

Up to 20 people were killed in the deadliest night of Israeli air raids on Gaza since the current offensive began, Palestinian sources told the BBC. Most occurred in attacks on a house and a cafe in the south where people were watching football's World Cup on Wednesday. 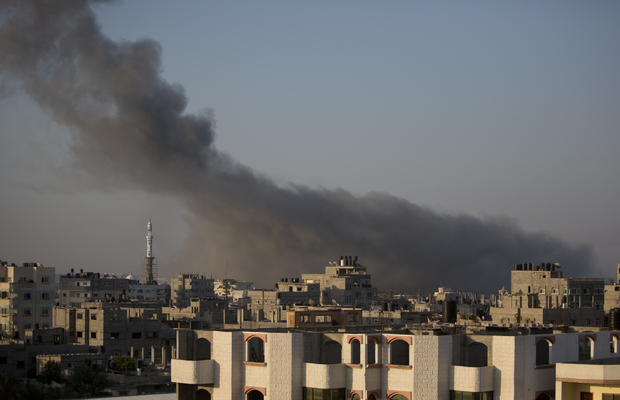 Militants in Gaza continued firing rockets into Israel on Thursday, with sirens sounding over southern towns.

State television in Egypt reported that the government is opening the main border crossing into the Gaza Strip at Rafah so Palestinians injured can receive treatment. A medical official in Northern Sinai said 20 ambulances have been sent to the crossing on Thursday.

The UN's Ban Ki-moon warned that the situation in Gaza was "on a knife-edge" and perilous, urging Israel and Palestinian militants to end hostilities.

The UN Security Council is due to meet for emergency talks on the crisis later on Thursday.

The deaths overnight take the number of Palestinians killed since Israel launched its Operation Protective Edge on Tuesday to at least 70, Palestinian officials say.

Israel says its targets have been militant fighters and facilities including rocket launchers, weapons stores, tunnels and command centres.

The Israeli military said that it had attacked 108 targets since midnight and that 12 rockets had been fired at Israel, seven of them intercepted by the Iron Dome defence system.

An Israeli air strike in southern Gaza was reported to have killed nine people watching the World Cup, in a cafe in the town of Khan Yunis.

Separately, eight Palestinians were killed in an air strike on a house near the city, the Palestinian health ministry said.

An Israeli army spokesperson says the earlier killing of eight civilians in the town had been a tragedy and not what Israel intended.

Tensions on the Israel-Gaza border heated up in June after Israel's arrest of hundreds of Hamas activists in the occupied West Bank, where three Israeli youths went missing and were later found dead. In a suspected revenge attack, a Palestinian teenager was abducted in East Jerusalem last week and burned alive.