Typhoon Neoguri beared down on the Japanese mainland on Wednesday after slamming into the southern Okinawa island chain, killing two people and leaving a trail of damage.

Packing gusts of up to 180km/h, the typhoon could hit the southern main island of Kyushu as early as Thursday, before moving east along the Japanese archipelago, the national weather agency said. 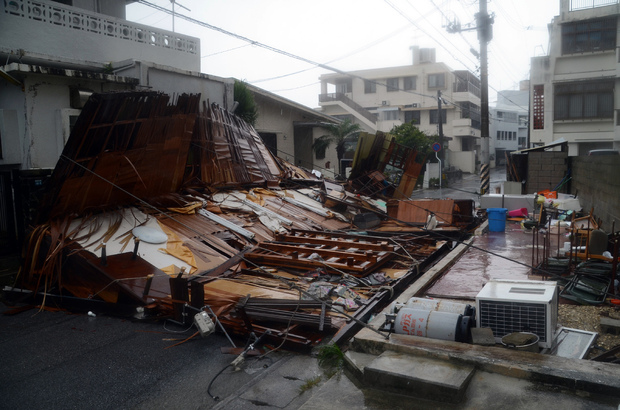 Strong winds caused this house to collapse in Naha on the island of Okinawa. Photo: AFP / Jiji Press

Officials said Neoguri would bring torrential rainfall and warned of the risk of flooding and landslides after the storm - which has already weakened from a super typhoon - forced 500,000 people to seek shelter in Okinawa on Tuesday.

By Wednesday morning, the typhoon was about 500km away from the southwestern coast of Kyushu, churning north in the East China Sea at 20km/h.

Kyushu - situated next to the biggest island of Honshu, where major cities including Tokyo and Osaka are located - was already experiencing heavy rain and strong winds, and authorities were likely to issue an emergency alert for residents to seek shelter ahead of Neoguri's landfall.

At the start of the week, officials issued their highest typhoon alert for Okinawa, warning that Neoguri - which means raccoon in Korean - could turn deadly.

On Wednesday, the weather agency's chief forecaster Satoshi Ebihara said the situation in Okinawa remained serious even as the typhoon moved out to sea, with the agency issuing a fresh rainfall alert.

In the Okinawan capital of Naha on Tuesday, traffic lights went out, trees were split, signboards flew about and a restaurant was destroyed.

Dozens were injured across the sprawling archipelago. The coast guard and police said a 62-year-old man was found dead after he was knocked off his boat in rough waters near Japan's mainland, while public broadcaster NHK said a fisherman, 81, died in southwestern Kumamoto prefecture.

Schools were closed, air and sea traffic ground to a halt, and nearly 70,000 Okinawan households had no power.