Police are considering fresh allegations against Australian entertainer Rolf Harris, who has been found guilty of indecently assaulting four girls and young women in Britain between 1968 and 1986.

The central allegation at Harris's seven-week trial in London concerned a friend of his daughter whom the court heard he groomed and molested from the age of 13 until she was 19. Other victims said they were touched or groped by him, sometimes at his public appearances. 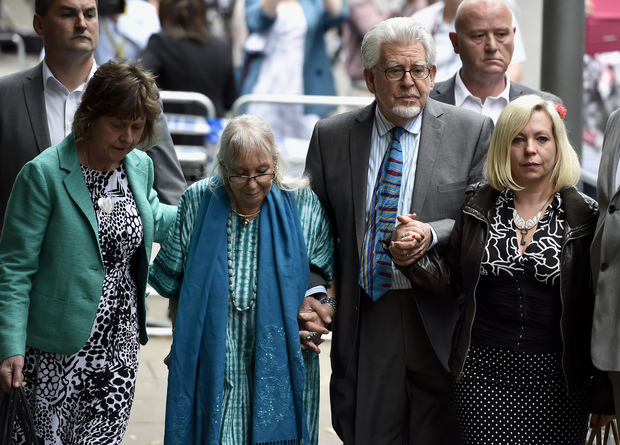 The 84-year-old was convicted by a jury of six men and six women on Tuesday, almost 38 hours into their deliberations at Southwark Crown Court.

Harris was allowed to remain seated in the glass-fronted dock, listening as he had throughout his trial on a headset. A short distance away his wife, Alwen Hughes, daughter Bindi, niece Jenny and other relatives and supporters looked on.

He remained impassive as the guilty verdicts were read out, while Bindi looked stunned, a BBC reporter at court said.

Harris will be sentenced on Friday. The judge, Mr Justice Sweeney, said a custodial term was "uppermost in the court's mind", but he wanted to see a medical report before sentencing.

Harris, who was granted bail, faced a mass of photographers and reporters as he left court in the company of his wife and daughter, who had attended most of the trial.

Among the claims not heard in court for various reasons is a respected British television presenter who says Harris groped her on live TV, and two Australian radio hosts who claim they were accosted 14 years ago.

An artist and musician who presented prime-time TV shows mostly aimed at children, Harris had been a mainstay of family entertainment in Britain and Australia for more than 50 years.

He was first questioned in November 2012 in Scotland Yard's Operation Yewtree investigation set up in the wake of sexual abuse allegations against the late BBC TV star Jimmy Savile.

Although his arrest was unconnected to Savile's offending, the publicity surrounding that case had prompted the friend of Harris's daughter to come forward.

But Harris was not initially named by the police or identified in the mainstream media until a few weeks after his arrest in March 2013.

The other women who gave evidence in court contacted police after Harris's arrest was made public and he was charged in August of that year.

A Waikato woman helped bring Rolf Harris to New Zealand in 1986 to raise awareness about sexual abuse and said she did so because of his reputation as a campaigner against child abuse.

Maxine Hodgson was the founder and former chief executive of Parentline, which runs parenting programmes, and counselling to children traumatised by abuse and domestic violence

Ms Hodgson said during the three days she spent with Harris he was grumpy and irritable until he saw fans. She particularly remembered the entertainer talking to hundreds of staff at a hospital.

"The irony of it now shouldn't be lost - a long story about children trusting a tramp and how that tramp eventually went away, the children learnt to love and believe certain people and not be frightened. And it was just a con-game."

New Zealand entertainer Gray Bartlett toured with Harris in the UK from 1969 to 1975. Throughout the trial he thought the star was innocent, he said, only to learn Harris had been living a double life.

"I'm desperately disappointed and saddened ... but even more so for his immediate family, Alwen and Bindi, who I knew well and of course not forgetting the victims because this is really what its about."

Mr Bartlett said he never suspected that Harris had a sinister side to him - but their friendship is basically over, as there was no way Harris could justify his actions.

Australia on Tuesday moved to strip Rolf Harris of some of the numerous honours bestowed during his five-decade career.

"Following his conviction in UK courts, the ARIA Board has made the decision to withdraw the ARIA Hall of Fame award bestowed upon Rolf Harris," the Australian Recording Industry Association said in a statement on its website.

An artist and musician who presented prime-time TV shows mostly aimed at children, including one aimed at combating sexual abuse of children, Harris was inducted into the ARIA Hall of Fame in 2008, Reuters reports.

In the Perth suburb of Bassendean where Harris grew up, the mayor said a meeting would be held later in the week to decide if a plaque outside his family home, and artwork hanging in council buildings, would be removed.