A delegation of senior Australian journalists has delivered a statement to the Egyptian consulate in Sydney calling for the immediate release of jailed reporter Peter Greste and his Al Jazeera colleagues.

The men had been found guilty of spreading false news and supporting the blacklisted Muslim Brotherhood. They had all denied the charges. 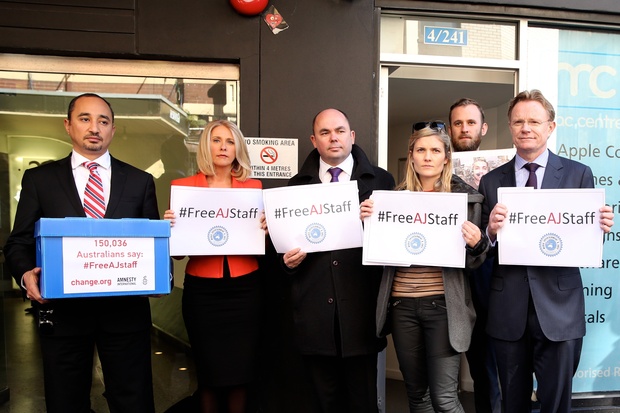 Egyptian President Abdel Fattah al-Sisi said last week that the independence of the judiciary must be respected and he would not interfere with the verdicts despite condemnation from Western leaders.

Egyptian Vice-Consul Ahmed Farid was handed the campaign letter on Monday, signed by more than 100 news organisations and non-government organisations around the world, as well as petitions with more than 150,000 signatures, the ABC reports.

Petitions by Amnesty International Australia and Change.org were also presented. Combined, the petitions were signed by 153,696 people.

It is being presented at several Egyptian diplomatic missions around the world on Monday.

The Muslim Brotherhood was banned and declared a terrorist group after the army deposed elected Islamist president Mohamed Morsi in July following mass protests against his rule. The Brotherhood says it is a peaceful organisation.