A human rights group wants the military government in Fiji to lift restrictions on journalists ahead of the election in September.

Amnesty International says the right to freedom of expression remains severely restricted in Fiji by laws and regulations which impose heavy penalties.

The group says there is a worrying pattern emerging of authorities trying to silence journalists ahead of the election.

It notes that two journalism academics are being investigated for commenting on an apparent admission by the military that it used torture. 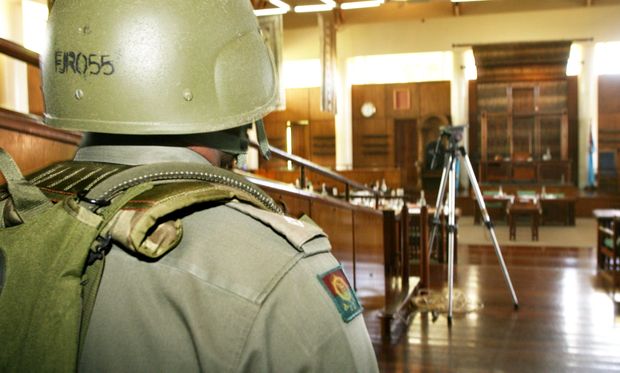 Media censorship was tightened in Fiji after military leader Frank Bainimarama staged a bloodless coup in December 2006 when this photo was taken. It shows a soldier after troops cleared senators and media from the debating chamber as the armed closed down Fiji's parliament. Photo: AFP

Amnesty's Fiji campaigner Michael Hayworth told Checkpoint the media must be allowed to publish information concerning the elections without fear of retribution.

He said a worrying pattern was emerging.

"These sorts of things add up and they create a climate in which journalists are a little bit afraid to report on what they might necessarily want to in the context of this censorship."

Mr Hayworth said that meant there was not the open, free and frank debate that there should be in the lead-up to the September polls.