Bob Dylan's handwritten manuscript for Like a Rolling Stone has sold for just over $US2 million at an auction in New York.

The working draft of the finished song sold at Sotheby's is written in pencil on a hotel letterhead, along with revisions, additions, experimental rhymes and doodles of animals.

The price for the annotated lyrics makes it the most expensive rock music manuscript sold at auction. 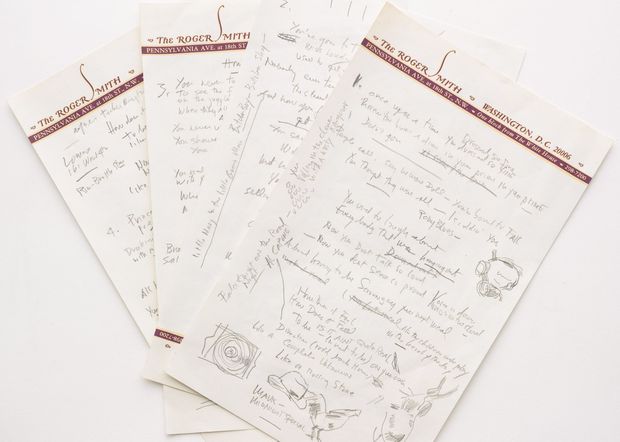 Bob Dylan's handwritten lyrics for 'Like a Rolling Stone' recorded in 1965. Photo: AFP

It shattered the previous record set in 2010 when John Lennon's handwritten lyrics for A Day in the Life, the final track from the 1967 album Sgt. Pepper's Lonely Hearts Club Band sold for $US1.2 million, according to Sotheby's.

The auction house described Like a Rolling Stone as "one of rock's most rousing classics, its thick, layered sound and innovative organ riff instantly recognizable."

The sale on Tuesday was Sotheby's first dedicated music history auction in more than a decade and included memorabilia from the Beatles, the Rolling Stones and Elvis Presley, Reuters reports.

Other items in the auction included Ronnie Wood's Zemaitis 1977 acoustic guitar that sold for $US75,000, Bruce Springsteen's autographed manuscript lyrics for Thunder Road, which fetched $US37,500 and Presley's flamboyant peacock jumpsuit from his days performing in Las Vegas, which went to the highest bidder for $US245,000.

A Grammy Award for Jackson presented to Johnny Cash and June Carter sold for $US37,500 and the Vox guitar organ, a hybrid instrument given to the Beatles by the inventor in 1964, brought in $US305,000.

The 150 lots in the auction came from collectors and people who worked in the music industry.

Sotheby's said it decided to hold the sale to test the market and to see what collectors are interested in buying. Earlier this month, original manuscripts and drawings by former Beatle John Lennon sold for $US2.9 million, more than double the estimated price.