There's international outrage over the verdicts handed down in Egypt on Tuesday to three Al Jazeera journalists accused of "spreading false news".

Australian Peter Greste, Canadian-Egyptian national Mohamed Fahmy - the bureau chief of Al Jazeera English - and Egyptian producer Baher Mohamed have been sentenced to seven years in prison. Baher Mohamed was given an extra three years for possessing a single bullet. 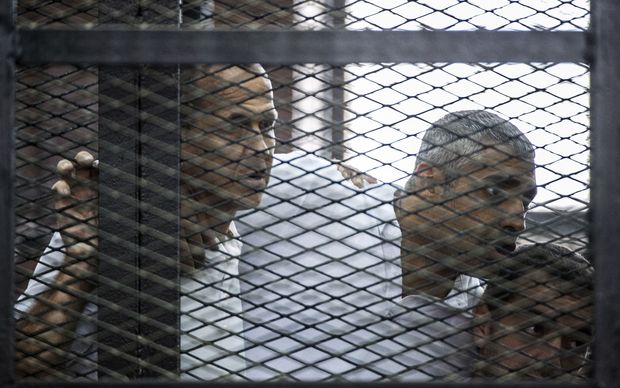 A court found them guilty on charges including helping a terrorist organisation - namely the now banned Muslim Brotherhood - by publishing lies. They had all denied the charges.

Three other journalists who were tried in absentia were handed 10-year sentences. One of those was British journalist Dominic Kane who works for Al Jazeera in Doha. He told Radio New Zealand's Nine to Noon programme on Tuesday that a complete miscarriage of justice has taken place.

"The prosecution had no evidence. The case was so flimsy, so inconsistent and at times incoherent, we all looked at it and said a just system and a just trial could only say there is one verdict - innocent, not guilty.

"Instead, you now have three innocent men who were doing their jobs in trying and dangerous circumstances, who are now convicted of helping terrorists and are housed in a prison in a small cell surrounded by murderers and rapists."

He said the convictions are the result of a campaign of harassment by the Egyptian authorities against Al Jazeera.

Dominic Kane said he was lucky to have left Egypt before the Al Jazeera offices in Cairo were raided and the others taken into custody. He hoped Egypt's new president would recognise the injustice that has taken place and issue pardons.

But Abdel Fattah al-Sisi said on Tuesday that the independence of the judiciary must be respected and he would not interfere with the verdicts.

Meanwhile, hundreds of journalists gathered in London on Tuesday to protest against the jail terms. They included BBC staff with black tape over their mouths who held a silent protest outside Broadcasting House.

The director of BBC news and current affairs, James Harding, said news organisations must unite when journalists are put in prison for doing their job.

"There's a bigger issue of principle here and that's the reason why the BBC, which obviously has a stake in freedom of expression and the freedom of journalists to do their job, must stand up when something like this happens. Because what is happening here is people are being intimidated and prevented from reporting." 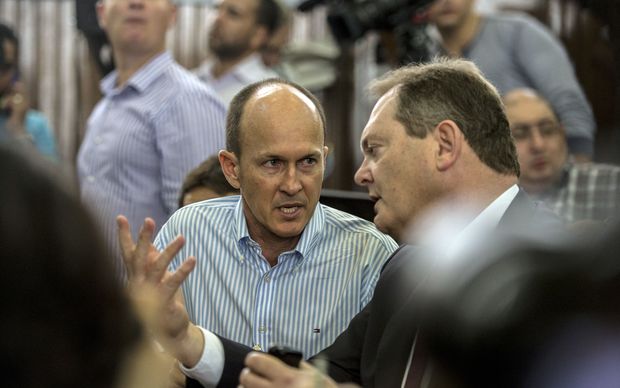 Greste family vows to fight on 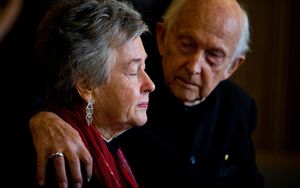 The courtroom quickly descended into chaos as the verdict was read out on Monday. Shaken and near tears, Peter Greste's brother Michael said: "This is terribly devastating. I am stunned, dumbstruck. I've no other words."

Parents Juris and Lois on Tuesday spoke of their shock at the verdict, which they watched live from Brisbane in Australia. They said the family is shattered, calling it a dark time for them but also for journalism.

Holding back tears, Mrs Greste said her son is strong and they would keep fighting for his release, as well as that of his Al Jazeera colleagues, the BBC reports.

The couple were reluctant to criticise the Egyptian judicial system, aware this might hinder the ongoing diplomatic efforts to put pressure on the government.

The Australian government said it was appalled by the sentencing of Peter Greste and on Tuesday summoned a senior Egyptian diplomat to protest against the sentencing.

Foreign Minister Julie Bishop told BBC that Canberra would work with the Egyptian government to try to secure Mr Greste's release "as soon as possible".

"We support Egypt's transition to democracy, but that also includes freedom of speech and press," she said.

Ms Bishop also ruled out imposing sanctions on Egypt, saying it was "not helpful at this stage".

Other Western governments said the verdict undermined freedom of expression.

The White House described the sentences as a blow to democratic progress in Egypt and called for the release of the journalists.

US Secretary of State John Kerry has described the sentences as chilling and draconian. The ruling came a day after Mr Kerry met newly elected President Abdel Fattah al-Sisi in Cairo and raised the issue of the journalists.

Mr Kerry said it was now critical for the Egyptian president to move quickly to address international concerns.

British Prime Minister David Cameron said he was "completely appalled" and the UK Foreign Office has summoned the Egyptian ambassador over the guilty verdicts.

The Muslim Brotherhood was banned and declared a terrorist group after the army deposed elected Islamist president Mohamed Morsi in July following mass protests against his rule. The Brotherhood says it is a peaceful organisation.

Al Jazeera, whose Qatari owners back the Muslim Brotherhood and have been at odds with Egypt's leadership since Mr Morsi was ousted, said the ruling defied "logic, sense and any semblance of justice".

The channel was banned from operating inside Egypt after being accused of broadcasting reports sympathetic to the former president and the Brotherhood. Al-Jazeera has consistently denied the allegations.

Judicial sources told Reuters the verdicts could be appealed before a higher court and a pardon was still possible.