Just over a decade after the US invaded Iraq, President Barack Obama is considering an open invitation to bomb parts of the nation. Prime Minister Nouri Al-Maliki says this may be the only solution to save his nation from disaster.

Iraqi government forces battled Sunni militants for control of the country's biggest refinery on Thursday as Mr Maliki waited for a response to an appeal for air strikes to beat back the threat to Baghdad. 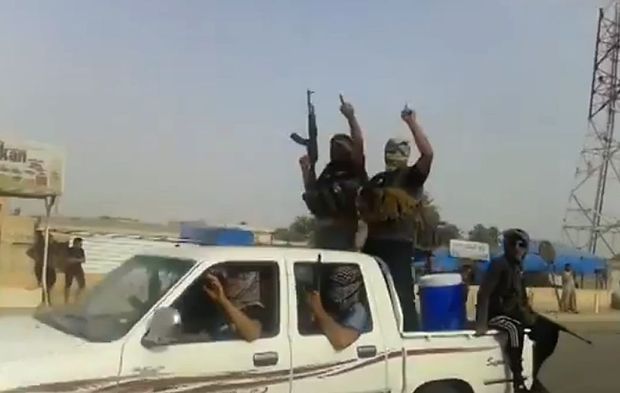 An image taken from a video uploaded on Youtube allegedly shows militants from the Islamic State of Iraq and Syria (ISIs) parading in the northern city of Baiji. Photo: "AFP / HO / YOUTUBE

The sprawling Baiji refinery, 200km north of the capital near Tikrit, was a battlefield as troops loyal to the Shi'ite-led government held off insurgents from the Islamic State of Iraq and Syria, also known as the Islamic State of Iraq and Levant (ISIL), and its allies who had stormed the perimeter a day earlier, threatening national energy supplies.

Video aired by Al-Arabiya television showed smoke billowing from the plant and a black flag used by ISIL flying from a building. Workers trapped inside the complex, which spreads for kilometres close to the Tigris River, said Sunni militants seemed to hold most of the compound and that the security forces were concentrated around the refinery's control room. Iraqi security officials have denied that the plant was close to falling.

The 250 to 300 remaining staff were evacuated early on Thursday, one of those workers told Reuters by telephone. Military helicopters had attacked militant positions overnight.

Baiji, 40km north of Saddam Hussein's home city of Tikrit, lies squarely in territory captured in the past week by an array of armed Sunni groups, spearheaded by ISIL, which is seeking a new Islamic caliphate in Iraq and Syria. On Tuesday, staff shut down the plant, which makes much of the fuel Iraqis in the north need for transport and generating electricity.

ISIL, which considers Iraq's Shi'ite Muslim majority as heretics in league with neighbouring, Shi'ite Iran, has led a Sunni charge across northern Iraq after capturing the major city of Mosul last week as Maliki's US-armed forces collapsed. The group's advance has only been slowed by a regrouped military, Shi'ite militias and other volunteers.

ISIL, whose leader broke with al Qaeda after accusing the global jihadist movement of being too cautious, has now secured cities and territory in Iraq and Syria, in effect putting it well on the path to establishing its own well-armed enclave that Western countries fear could become a centre for terrorism. 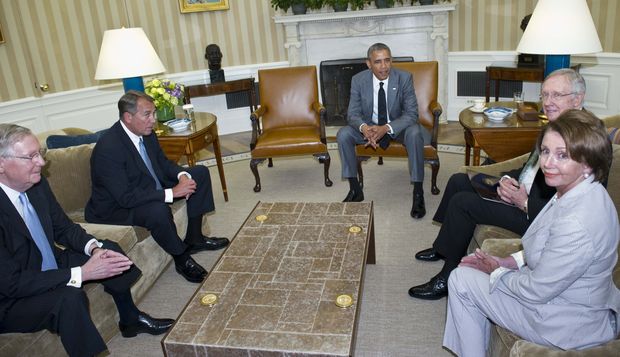 Time up for Malaki?

The Iraqi government made public on Wednesday its request for US air strikes, two-and-a-half years after American forces ended the nine-year occupation that began by toppling Saddam Hussein in 2003.

President Barack Obama had told Congressional leaders he does not need lawmakers' approval for any action, the top Senate Republican says. Senator Mitch Mc McConnell was speaking after a meeting between Mr Obama and senior members of Congress on Wednesday.

Prime Minister Nouri al-Maliki appealed to Iraqis to unite against the rebels, who he said were killing hundreds of people and destroying the country, the BBC reports. 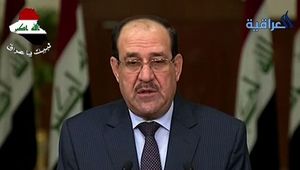 In an address on national television, the leader acknowledged the advance of the militants was a setback, but said that it had allowed Iraq to recover its national unity. He insisted the people of Iraq would not be defeated by the militants. "Those who are killers and criminals who represent foreign agendas."

Washington has given no indication it will agree to attack and some politicians have urged President Barack Obama to insist that Mr Maliki goes as a condition for further US help, Reuters reports.

Within hours of Iraqi Foreign Minister Hoshyar Zebari making the request public, General Martin Dempsey, the chairman of the Joint Chiefs of Staff, avoided a direct answer when asked by senators whether Washington would accede to the Iraq request.

"We have a request from the Iraqi government for air power," he said. Asked whether the US should honour that request, he answered indirectly, saying: "It is in our national security interest to counter ISIL wherever we find them."

American officials, speaking on condition of anonymity, said the Iraqi request had included drone strikes and increased surveillance by US drones, which have been flying over Iraq. However, targets for air strikes could be hard to identify.

Another hurdle to US military engagement could be political pressure in Washington for Mr Maliki to quit. Several leading figures in Congress have spoken out against the premier, whom Mr Obama has urged to do more to overcome sectarian rifts.

"The Maliki government, candidly, has got to go if you want any reconciliation," said Dianne Feinstein, one of Obama's fellow Democrats, who chairs the Senate Intelligence Committee.

Republican senator John McCain backed military support, but urged Mr Obama to "make it make very clear to Maliki that his time is up".

A New Zealand woman teaching in northern Iraq says everyday life there has not been affected largely by the military action.

Helen Donnelly is living in Erbil, a largely Kurdish region two hours from Mosul. She said people were keeping a very close eye on the situation, regularly checking international news broadcasts and the internet for updates.

Ms Donnelly said petrol was being rationed and people were queuing for food. Other than that there has been very little disruption and many people in the region were not worried because they did not support the Iraqi government.