Holders Spain were knocked out of the World Cup as Chile consigned them to a second straight defeat in Group B.

Eduardo Vargas finished off a well-worked Chile move by poking in a shot to give his side an early lead. 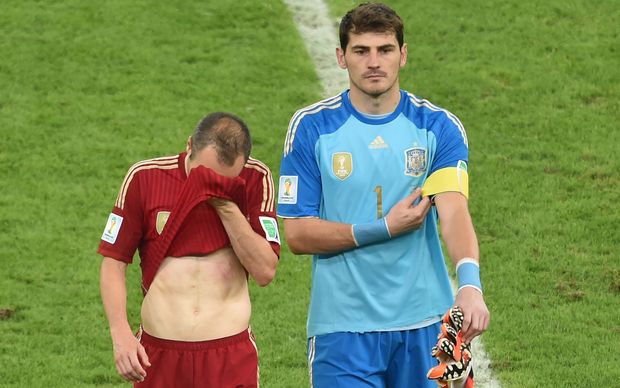 Spain's goalkeeper and captain Iker Casillas and midfielder Andres Iniesta walk off the pitch after losing their Group B match against Chile. Photo: AFP

Diego Costa had a shot blocked when played through on goal and Sergio Busquets side-footed wide from five yards as Spain failed to recover.

The Dutch, who beat Spain 5-1, and Chile each have six points and they play each other in Sao Paulo next Monday. Spain face Australia in Curitiba bidding to avoid finishing bottom.

Spain became the third champions in the last four World Cups to be eliminated at the first hurdle.

They won the 2008 European Championship and their first World Cup in South Africa four years ago.