A British Guiana One Cent Magenta postage stamp from 1856, the only one of its kind to still exist, sold for a record $US9.5 million at Sotheby's on Tuesday.

The hefty price, which includes the buyer's premium, makes the 2.5 cm by 3.2 cm stamp printed in black on magenta paper the most expensive stamp ever sold at auction, and the most valuable object by weight and size, according to the auction house. 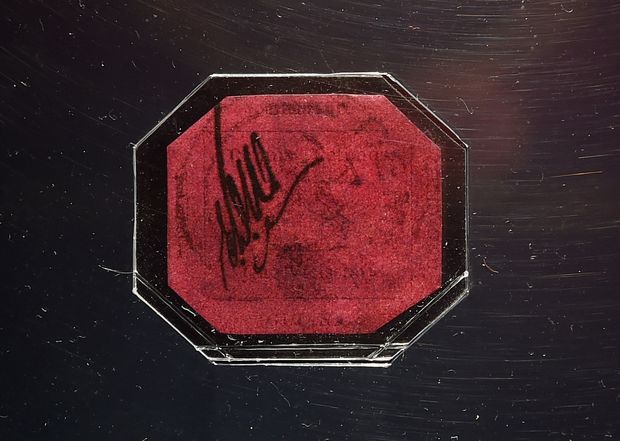 The front of the British Guiana One-Cent Magenta, described as the most famous stamp in the world, on display in a glass case at Sotheby's in New York. Photo: AFP

An anonymous telephone bidder purchased the stamp during the bidding in the packed auction.

"Every time it has come up for auction and sold, it has brought the highest price ever paid for a stamp," said David Redden, the worldwide chairman of books and manuscripts at Sotheby's. 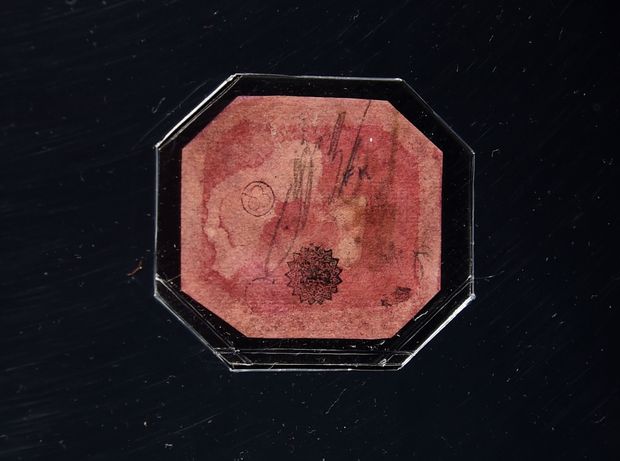 The reverse side of the British Guiana One-Cent Magenta. Photo: AFP

"It has always been the world's most-famous stamp. It is one of these objects around which a huge mystique has grown up over the years," he said.

The previous record auction price for a single stamp was about $US2.2 million. It was set in 1996 for the Treskilling Yellow, a Swedish stamp that is a misprint of an 1855 shilling stamp in the wrong colour.

The British Guiana stamp was sold by the estate of the late multimillionaire John du Pont, an heir to the du Pont chemical fortune, who died in prison in 2010 at the age of 72. Du Pont was serving a murder sentence for the shooting of David Schultz, a champion US wrestler, in 1996.

Earlier this year, the Royal Philatelic Society of London re-authenticated the stamp, which du Pont, an avid stamp collector, purchased in 1980 for $935,000.

The British Guiana One-Cent Magenta is one of the world's first postage stamps. In 1856 in British Guiana - now the Republic of Guyana - the local postmaster asked a newspaper to print some stamps after supplies from Britain, where its stamps were printed, were delayed.

There are still a few four-cent stamps issued by the South American country, but this is the only one-cent. Until this year, the stamp had not been on public view since 1987, according to Sotheby's.

The stamp was discovered in 1873 by a 12-year-old schoolboy named L. Vernon Vaughan, who was living in British Guiana with his family. He found it among his family papers.

He kept it in his collection and later sold it to another collector in British Guiana. It surfaced in Britain in 1878 and was then purchased by Count Philippe la Renotiere von Ferrary, a noted stamp collector.

The count's collection was donated to the postal museum in Berlin and was later seized by France as war reparation from Germany and sold in 1922.

It was sold several times before du Pont purchased it. Part of the proceeds of the sale will go to the Eurasian Pacific Wildlife Conservation Foundation, which du Pont supported. 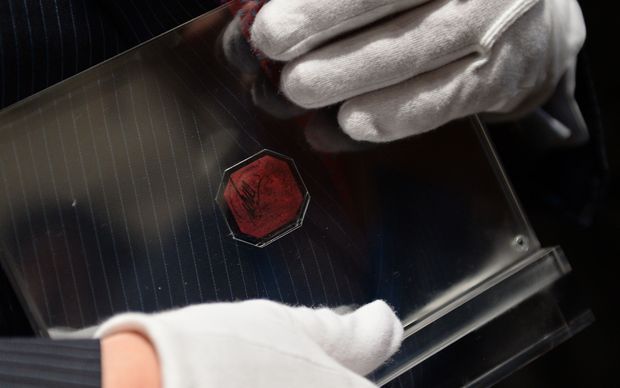