The suspected ringleader of the September 2012 raid on a US diplomatic post in the Libyan city of Benghazi, that left four Americans dead, has been captured, according to the Pentagon.

The BBC reports that Ahmed Abu Khattala was taken into custody in a secret US military raid in Libya on 15 June. He is now being held in a secure location outside the country, a Pentagon spokesman confirmed.

US Ambassador Chris Stevens and three others were killed in the attack.

"There were no civilian casualties related to this operation, and all US personnel involved in the operation have safely departed Libya," Pentagon press secretary Rear Adm John Kirby wrote in a statement. 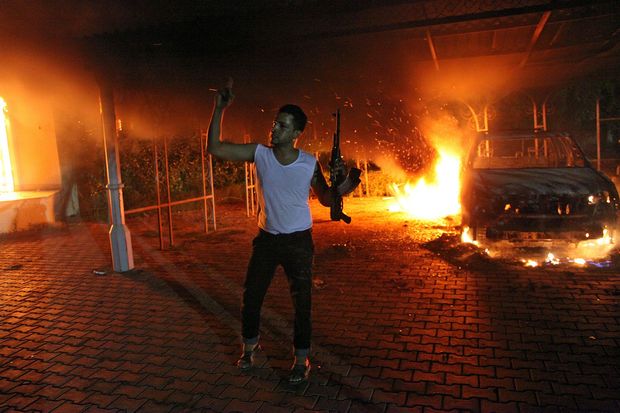 A file picture taken on September 11, 2012 shows an armed man waving his rifle as buildings and cars are engulfed in flames after being set on fire inside the US consulate compound in Benghazi. Photo: AFP

US President Barack Obama praised the courage and professionalism of the military, law enforcement and intelligence personnel who tracked and captured Mr Khattala, who the US describes as a "key figure" in the attack.

"With this operation, the US has once again demonstrated that we will do whatever it takes to see that justice is done when people harm Americans," he said in a White House statement.

Mr Khattala would face the "full weight of the American justice system", he said, an indication the US will try him in a civilian court rather than hold him at the military detention centre at Guantanamo Bay, Cuba.

In August, the New York Times reported that federal prosecutors had prepared secret charges against him, accusing him of murder for his role in the attack.

On 11 September 2012, gunmen stormed the US consulate in Benghazi and set it on fire.

The White House initially said the attack stemmed from anti-American protests over a crude video produced in the US that was deemed insulting to Islam.

Government investigators soon determined it was an organised attack planned by local militias, although the New York Times claimed after an extensive investigation that some of the attackers were indeed motivated by the film.

The US quietly offered as much as US$10m for information in the months following the attack.

The BBC reports that in subsequent years, the incident has become a political lightening rod, with Republicans accusing President Barack Obama's administration of covering up the involvement of militant groups in the days after the attack in order to assist Mr Obama's 2012 re-election campaign.

In May, the Republican-led House of Representatives voted to establish a committee to investigate the White House response to the attack.

The special panel was approved in a 232-186 vote, which went largely along party lines, and is said to be the eighth inquiry on Benghazi.

Previous independent, cross-party and Republican-led inquiries have blamed the state department for inadequate security at the embassy.

Republicans have been very critical of then-Secretary of State Hillary Clinton, who is now weighing a 2016 presidential run.