Robin Van Persie and Arjen Robben both scored twice as the Dutch came back from a penalty to win emphatically.

The Dutch went behind to a Xabi Alonso penalty for Spain in the 27th minute, before striker Van Persie equalised with a diving header just before the break. 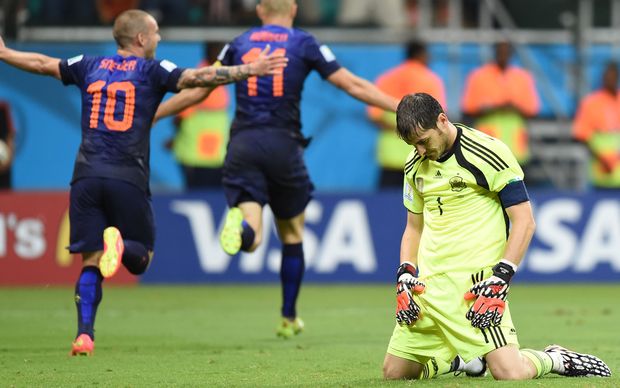 Then it was all the Netherlands, winger Robben taking the lead on the 54 minute mark with a classy first touch, turn and shoot, before defender Stefan De Vrij bundled in a scrappy third goal on 64 minutes from a corner.

Then a mistake from goalkeeper Iker Casillas saw him robbed by Van Persie for the Dutch side's fourth goal in the 74th minute.

Then in the 80th minute Robben scored a superb solo goal, tormenting the Spanish defence as he raced into the box and around the hapless Casillas and two defenders to slot home.

It's Spain's worst defeat in 41 years. And it could have been worse, Casillas coming up with a late, superb double save to keep it to five goals.