Thousands of South Korean police have raided a church in search of a fugitive billionaire wanted over the recent passenger ferry disaster.

Some 6000 officers stormed the Evangelical Baptist Church of Korea in Anseong city belonging to Yoo Byung-eun, who is thought to own the firm that operated the sunken ferry. Three church followers were detained on charges of assisting his escape. 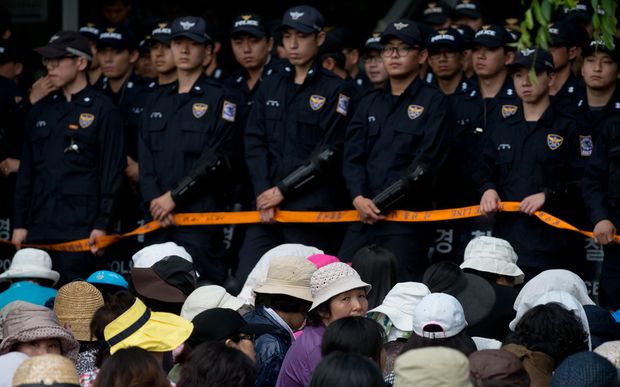 Followers sit before police outside the compound of church leader Yoo Byung-Eun on Wednesday. Photo: AFP

The overloaded Sewol sank off the south-west coast on 16 April this year on a routine journey from Incheon on the mainland to the southern holiday island of Jeju.

Of the 476 passengers and crew on board, 339 were children and teachers from the same school on the outskirts of Seoul. Only 172 people were rescued and the remainder are all presumed to have drowned.

Fifteen crew members went on trial over the deaths on Tuesday. Ferry captain Lee Joon-seok, 69, and three others face the most serious charge of "homicide through wilful negligence", the BBC reports.

A separate trial of senior executives blamed for procedural lapses is due to start later in June.

President Park Geun-Hye this week urged police and prosecutors to step up a nationwide manhunt for Mr Yoo, saying he must be brought to justice.

The 74-year-old is wanted as part of an ongoing investigation into embezzlement and tax fraud. Investigators are also questioning whether corruption or mismanagement within the ferry company led to poor safety standards.

The leading religious figure is believed to own the Chonghaejin Marine company that operated the Sewol.

Hundreds of church followers built a blockade in front of the compound but did not try to stop the police from entering the premises, Yonhap news agency reported.

South Korean authorities have raised the reward for information on Mr Yoo's whereabouts to almost $US500,000.