As many as 500,000 people have been forced to flee the Iraqi city of Mosul after Islamist militants effectively took control of it, the International Organization for Migration says.

Militants from the Islamic State of Iraq and the Levant (ISIS) overran Mosul and a string of Sunni Arab northern towns on Tuesday, in a major blow to the Iraqi government that the United States warned threatens the entire region. 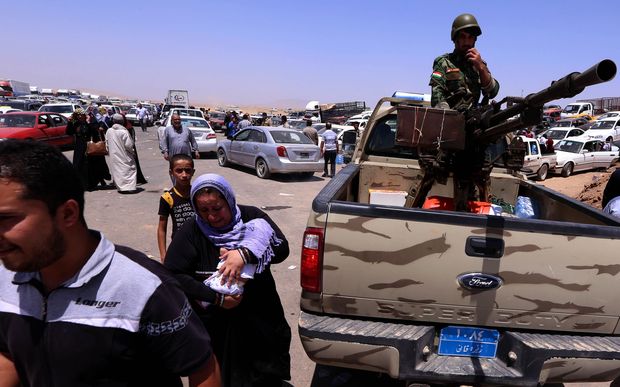 Thousands of Iraqis are fleeing violence in the northern Nineveh province. Photo: AFP

Jihadists are firmly in control, patrolling the streets of Iraq's second city, witnesses told AFP. Gunmen, some in military uniforms and others wearing black, stood guard at government buildings and banks, calling over loudspeakers for government employees to go back to work.

Troops were among those fleeing as hundreds of jihadists from the ISIS group overran Iraq's second city and much of the surrounding province of Nineveh. ISIS has now reportedly taken Baiji, home to Iraq's largest oil refinery, the BBC reports.

Prime Minister Nouri Maliki has asked parliament to declare a state of emergency.

ISIS is an offshoot of al-Qaeda which now controls considerable territory in eastern Syria and western and central Iraq, in a campaign to set up a militant enclave straddling the border.

Residents of Mosul said jihadist flags were flying from buildings and that the militants had announced over loudspeakers they had "come to liberate" the city.

"The situation is chaotic inside the city, and there is nobody to help us," government worker Umm Karam said. "We are afraid."

US State Department spokeswoman Jen Psaki said the situation in Mosul, Iraq's second city, was "extremely serious" and that America supported "a strong, co-ordinated response to push back against this aggression".

The BBC reports that the tens of thousands of fleeing refugees are heading to three towns in the nearby region of Kurdistan where authorities have set up temporary camps for them.

The Iraqi government is struggling with a surge in sectarian violence that has killed almost 800 people, including 603 civilians, in May alone, according to the United Nations. Last year, more than 8860 people died.

Parts of Ramadi, the capital of Anbar province, and much of the nearby city of Falluja have been under the control of ISIS and its allies since late December last year - something that Mr Maliki has been unable to reverse.