Metro workers in Sao Paulo have suspended their strike for two days to allow for negotiations.

However, workers are threatening to strike again on Thursday if their demands are not met - the same day football's World Cup begins Brazil's biggest city. 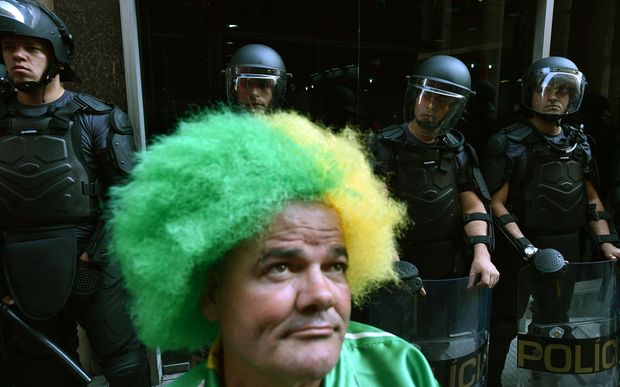 The South American nation's preparations for the World Cup have been marred by fatal accidents, missed deadlines and protests.

Commuters will be breathing a sigh of relief, as will authorities who have been under huge pressure to reach a deal with metro workers, the BBC reports.

The workers went on strike on 5 June, creating traffic chaos in one of the world's most congested cities with a population of about 20 million. The state subway company has offered an 8.8% pay rise, but this has been rejected.

On Monday, the company said it had fired dozens of workers for strike-related disturbances.

The union said if staff threatened with dismissal aren't reinstated, the protest would resume on Thursday affecting the opening match between Brazil and Croatia at Arena Corinthians stadium on the outskirts of the city.

Meanwhile, riot police used tear gas against protesters supporting the metro workers' strike. A group of about 150 strikers and protesters set fire to piles of rubbish to block a central avenue in Sao Paulo's business hub, prompting officers to fire stun grenades and then tear gas.

Thousands of extra police and soldiers will be deployed to ensure that the matches get under way smoothly.

A worker building a monorail in Sao Paulo has died after a section of the prestigious project collapsed. Authorities said at least two others were injured on Monday.

The 17.7-kilometre-long monorail was originally meant to be completed in time for the World Cup, but is behind schedule.

It was meant to connect Congonhas airport, which handles mainly domestic flights, to three metro lines. Eight workers have died in accidents during the building of the country's 12 World Cup arenas.