Two men have been given life sentences by a Moscow court for the 2006 murder of journalist Anna Politkovskaya, according to Russian news agencies. They were among five men convicted of the crime in May. 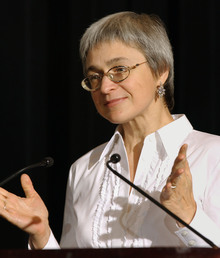 The 48-year-old investigative reporter and vocal critic of Russia's war in Chechnya was shot in a lift in her block of flats.

Three of the men had been acquitted of the murder, but Russia's supreme court ordered that they be retried, the BBC reports.

The three other convicted of the killing - two of whom are Makhmudov's brothers - were sentenced to serve between 12 and 20 years.

But her pieces, which were highly critical of President Vladimir Putin, then serving his second term, and the Chechen leadership, angered many in authority.