Syrian authorities say Bashar al-Assad has been re-elected president for another seven years with almost 89 percent of the vote after a poll labelled a farce by rebels fighting to overthrow him, whose outcome was never in doubt.

The election was held in the midst of the country's ongoing civil war and held only in the roughly 40 percent of Syrian territory controlled by the government, and among expatriates. 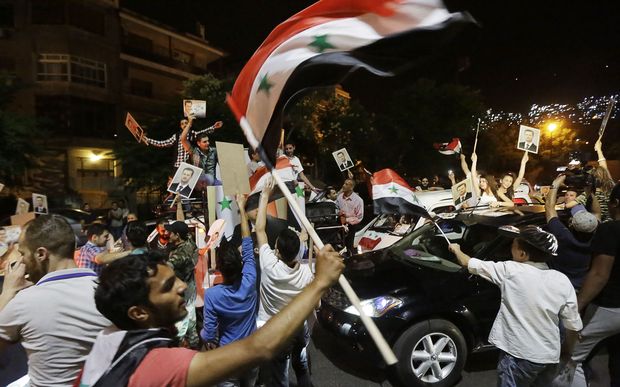 "I congratulate Syria for choosing its chief, who will carry its people to the shores of security and stability," he said.

Celebratory shots fired by Mr Assad supporters killed at least three people in Damascus as the results were announced, the Syrian Observatory for Human Rights said.

State media had trumpeted a big turnout, and an official said earlier the figure reached 73.42 percent, or 11.6 million people out of 15.8 million called on to vote, AFP reports.

Pro-government newspaper Al-Watan said millions had voted, "defying terrorism and its mortars, rockets, car bombs and suicide attackers, to prove the legitimacy" of Mr Assad for a third seven-year term.

However, opposition activists were quick to claim that people had voted out of fear, not conviction.

Earlier, Mr Assad "thanked all the Syrians who turned out en masse to vote". His office's Facebook page said Syrians "are proving day after day their belief in a culture of life, hope and defiance, in the face of a culture of death, terrorism and narrow-mindedness".

The United States said it was a "disgrace" to hold an election in the midst of a three-year-old war that has killed more than 162,000 people and driven millions from their homes. The election had "intentionally denied millions of Syrians the right to vote," State Department spokeswoman Marie Harf said.

US Secretary of State John Kerry, who was in Beirut on Wednesday, described the vote as a "great big zero," and urged Mr Assad allies Iran, Russia and Lebanon's militant group Hezbollah to end the war.

With millions having fled their homes and the country, Mr Kerry announced $US290 million in humanitarian aid for Syria and countries hosting refugees.

United Nations diplomat Lakhdar Brahimi, who brokered two rounds of abortive peace talks between Damascus and the opposition this year, stepped down on Saturday saying his mediation had reached stalemate. He had infuriated the government by criticising the election as an obstacle to his peace efforts.