The United States and France have called Syria's presidential election, expected to deliver an overwhelming victory for President Bashar al-Assad, a farce and a disgrace.

As the country's civil war continues, voting is not allowed in areas outside President Assad's control. 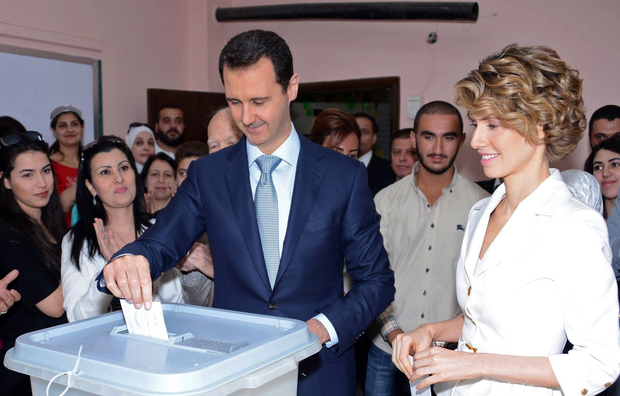 President Bashar al-Assad and wife Asma al-Assad casting their votes at a polling station in Maliki. Photo: AFP / The official Facebook page of the Syrian Presidency

Rebel fighters, the political opposition in exile, Western powers and Gulf Arabs say no credible vote can be held in a country where swathes of territory are outside state control and millions have been displaced by conflict, Reuters reports.

French Foreign Minister Laurent Fabius said the poll was a tragic farce. "The Syrians in a zone controlled by the Syrian government have a choice of Bashar or Bashar. This man has been described by the UN Secretary General as a criminal," he said.

The United States also issued a condemnation, with a State Department spokeswoman calling the presidential election "a disgrace", "detached from reality and devoid of political participation".

For the first time in five decades, the Assad family is being challenged by two officially approved candidates.

However the BBC reports the other two candidates - Maher Hajjar and Hassan al-Nouri - are not widely known and have been unable to campaign on an equal footing with the president.

Prime Minister Wael al-Halqi said the election was a "historic day" for Syria and that a large turnout would "prove to the entire world that the Syrian people have decided and are determined to make the electoral process a success".

State television showed long queues of people waiting to vote at polling stations in areas under state control, as well as crowds waving flags and portraits of the president.

An hour before voting was due to end at 7 pm, state media said polling stations would stay open until midnight because of what officials said was heavy voter turnout.