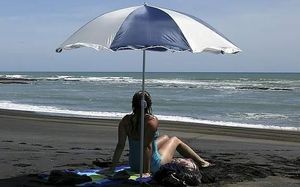 New Zealand has one of the highest melanoma rates in the world. Photo: PHOTO NZ

The treatments are designed to enable the immune system to recognise and target tumours. The findings were released at the American Society of Clinical Oncology conference in Chicago.

The experimental drugs, pembrolizumab and nivolumab, block a biological pathway known as PD1, which cancers use to camouflage themselves from the immune system, the BBC reports.

In one trial, 69 percent of patients survived at least a year. In the other, which combined two immuno-therapy drugs, survival was 85 percent after one year and 79 percent after two years.

Those results are impressive given that, until recently, the outlook for patients with advanced melanoma - skin cancer which has spread to other organs and very hard to treat - was bleak. The average life expectancy was about six months.

However, doctors are urging caution. The results which have been published are of Phase I, early stage trials. Much larger Phase III trials are underway involving many British hospitals. Only when they report, in about a year's time, can clinicians be sure what the likely benefits will be.

New Zealand and Australia have among the highest melanoma rates in the world, and skin cancer is by far the most common cancer affecting New Zealanders. The Cancer Society says the total number of new melanoma and non-melanoma skin cancer cases amounts to about 80 percent of all new cancers each year.