The vote for the hosting of football's 2022 World Cup must be re-run if corruption allegations surrounding Qatar's winning campaign are proved to be accurate, a member of FIFA's Independent Governance Committee says. 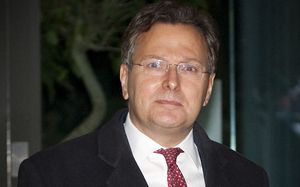 A British newspaper claims it has evidence that about $US5 million was paid to officials in return for votes for Qatar's successful bid, allegations organisers have "vehemently" denied.

Lord Goldsmith, Britain's former Attorney-General, said the sport's world governing body had to produce a convincing and transparent answer to the allegations.

"I believe that if these allegations are shown to be true, then the hosting decision for Qatar has to be rerun," he told BBC radio.

"I don't see how if it is proved, it is not proved yet though there is a case to answer, if it is proved, that the decision to give Qatar the World Cup was procured by frankly one can describe it in no other way as bribery and improper influence, then that decision ought not to stand."

The man at the centre of the allegations, Qatari former FIFA executive committee member and Asian Football Confederation chief Mohamed Bin Hammam, was not an official member of the bid team and has yet to comment publicly on the allegations.

FIFA has already launched an investigation into corruption allegations surrounding the bid, headed by American lawyer Michael Garcia, which was expected to report this year.

If the unprecedented decision was taken to re-run the vote, it is fair to assume that the losers in the 2010 ballot, who had already spent millions of dollars satisfying the technical criteria for a bid, would be in the frame, Reuters reports.

The convoluted way the 2018 and 2022 bidding processes became intertwined muddies the waters somewhat, but the United States, South Korea, Japan and Australia could all claim to have been most hard-done-by if any corruption was proven.

The United States, who finished second to Qatar in the final round of voting, has enough quality venues already functioning to host two World Cups. They also have plentiful hotels and a track record of organising big events well, including the 1994 World Cup which is still the best-attended tournament.

Australia garnered just one vote in the first round of voting, but would also not need to embark on major venue or infrastructure construction if another host was required for 2022. The country invested $A43 million ($US40 million) in their bid to host the tournament for the first time.

South Korea co-hosted the 2002 tournament with Japan and is gearing up to host the Asian Games, the world's second largest multi-sport gathering after the Olympics, in Incheon later this year.