Details of the "gist" of talks between Tony Blair and George Bush before the Iraq war are to be published, according to the United Kingdom's Chilcot inquiry.

But transcripts and full notes of conversations will remain secret, at the request of the government, the BBC reports. 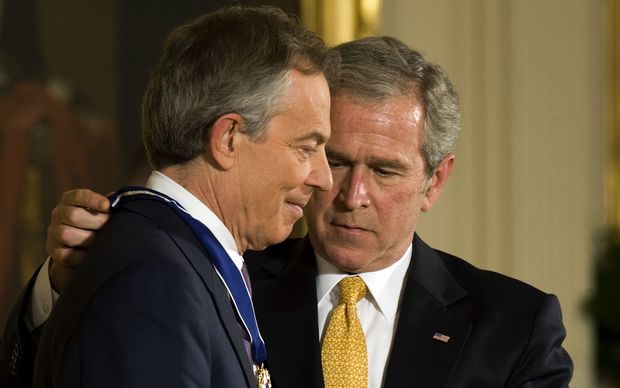 Discussions are taking place over the publication of confidential correspondence between Mr Bush and Mr Blair. Photo: AFP FILE

The agreement between the inquiry and Cabinet Secretary Sir Jeremy Heywood could clear the way for the report to be published this year.

It is thought to have been delayed by wrangling over what could be released.

The inquiry has been given access to full records of talks between the two leaders in the run-up to war but is being prevented by the government from publishing them in its final report, even after offering to block out sensitive parts.

The UK government's grounds for refusing the request to publish the full documents and transcripts is that it could prejudice future relations between the two countries.

The inquiry has instead been granted permission to "disclose quotes or gists of the content" to help explain its conclusions, inquiry chairman Sir John Chilcot explained in a letter to Sir Jeremy.

The documents include 25 notes from Mr Blair to Mr Bush and more than 130 records of conversations between the former prime minister and then US president in the run-up to war.

The inquiry, which is examining the UK's participation in military action against Saddam Hussein and its aftermath, began in 2009 and its last public hearings took place in 2011. It has cost more than £7m so far.