A woman has been bludgeoned to death by members of her own family outside the High Court building in the Pakistani city of Lahore. 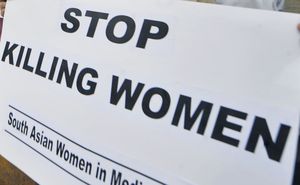 A protest against honour killing in Karachi in 2008. Photo: AFP (file)

The family had accused Farzana Iqbal, 27, of marrying without their consent.

Police said her father, brothers and one of her cousins grabbed her she was entering the court building for a hearing about her case and hit her on the head with bricks.

She was taken to hospital with head injuries and pronounced dead there.

All the suspects except her father escaped; he was arrested.

Iqbal had been engaged to her cousin but married another man said Umer Cheema, a senior police officer.

Her family registered a kidnapping case against him but Iqbal had gone to court to argue that she had married of her own free will, he said.

Around 1000 women in Pakistan are killed every year by their families in honour killings, according to the Aurat Foundation.

The true figure is probably many times higher since the foundation compiles figures only from newspaper reports. The government does not compile national statistics.