The chief of defence in Nigeria says the military knows where the 200 girls abducted by Boko Haram are, but has ruled out using force to rescue them. 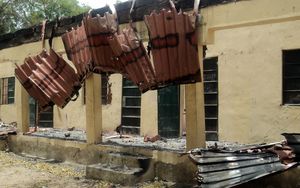 After the raid: a classroom at the government girls secondary school in Chibok. Photo: AFP (file)

Air Chief Marshal Alex Badeh was quoted by the News Agency of Nigeria as saying the good news for parents was that the military know where the girls are, but he could not tell them where that is and force cannot be used because the girls may be killed.

The girls were kidnapped on the night of 14 April from a secondary school in the northeastern village of Chibok in Bono state.

The BBC reported on Monday that a deal was close to being agreed to rescue the girls in exchange for Boko Haram prisoners, but it was called off at the last minute.

Over the weekend, Senate President David Mark ruled out a deal with Boko Haram.

"This government cannot negotiate with criminals and ... will not exchange people for criminals. A criminal will be treated like a criminal," he was quoted as saying.

Surveillance drones are scanning the Sambisa forest. But the forest covers 60,000 square km, more than twice the size of Rwanda, and the rebels know the terrain intimately.

Boko Haram means "Western education is a sin" in the northern Hausa language.