Police in Belgium are investigating a possible link to terrorism in a fatal attack at the Jewish Museum in Brussels on Saturday afternoon. 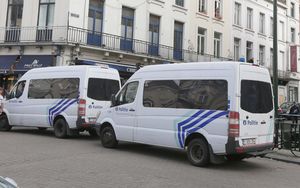 Police vans at the Jewish Museum in Brussels after the shooting. Photo: AFP

Three people were killed by a gunman and a young man was left brain dead. The inquiry was initially opened for murder and attempted murder with premeditation.

But the inquiry was transferred on Monday to a federal public prosecutor's office authorised to handle terrorist cases.

The office said the decision to transfer the case was based on the identity and nationality of the casualties. They included an Israeli couple said to be working for the Belgian government.

The third person shot dead was a French woman who did volunteer work at the museum and the other is a museum employee.

Security camera videos show the gunman walk into the museum entrance, remove a Kalashnikov-style automatic rifle from a bag and shoot through a door.