Narendra Modi has taken the oath of office as India's new prime minister in a ceremony in the forecourt of the presidential palace in Delhi.

Mr Modi took the oath before thousands of guests and the leaders of seven South Asian countries, including prime minister Nawaz Sharif from Pakistan.

It is the first time since the two countries won independence in 1947 that a prime minister from one state has attended such a ceremony in the other.

The two countries have fought three wars in the past 60 years.

Mr Modi led the BJP, a Hindu nationalist party to a landslide win in the recent election, the biggest by any party in India for 30 years.

"I, Narendra Damodardas Modi, swear in the name of God that I will maintain the integrity of India," Mr Modi said in Hindi.

"I will work without fear, anger or hatred and will do justice to all as per the constitution."

The BBC reports 45 MPs were also sworn in as ministers, although they are yet to be allocated their ministries. 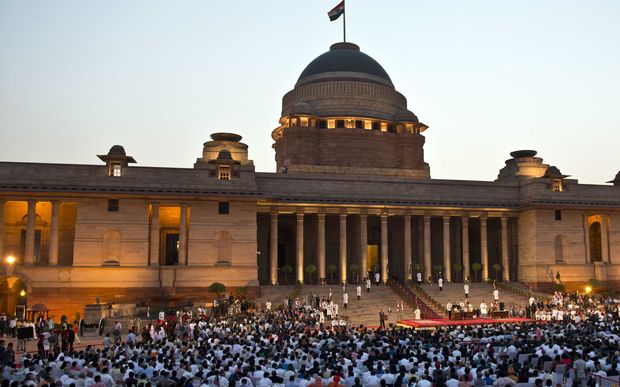 The swearing-in ceremony at the Presidential Palace in New Delhi. Photo: AFP