A man with a knife has killed four people and wounded 22 others aboard a subway train in Taipei, Taiwan. 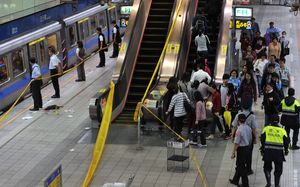 The scene of the stabbing at the Jiangzicui metro station in Taipei. Photo: AFP

A college student, 21, was arrested immediately after the incident on Wednesday, which police said was the first fatal attack on the subway system since it began operations in 1996.

In total, 22 travellers were wounded and taken to hospital. Police said half of them were in a serious condition.

"He told the police that he had wanted to do a 'big thing' such as this since his childhood," said New Taipei City police chief Chen Kuo-en.

"He said he had planned to do this after his graduation, but last week decided to act ahead of his schedule," Chen said.

The student previously bought two knives at a supermarket in Taipei.