A former Polish war refugee who met Prince Charles in Canada says he likened some Nazi actions in Europe to those of President Vladimir Putin of Russia. 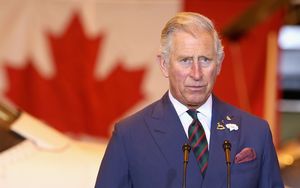 Marienne Ferguson spoke after meeting the prince at an immigration museum where she works in Nova Scotia.

As they discussed Hitler's takeover of countries, the prince "said something to the effect of 'it's not unlike... what Putin is doing,'" she said, adding it was a very short remark.

Clarence House said it would not comment on a private conversation.

Former US Secretary of State Hillary Clinton made the same comparison between Mr Putin and Hitler in March, when Russia began issuing passports to Ukrainian citizens.

Prince Charles and the Duchess of Cornwall are on a four day visit to Canada.

The prince and the president are both due to attend a D-Day anniversary event in France next month.

The BBC reports Ms Ferguson, 78, left Poland for Canada just before the Nazi invasion in 1939. She escaped to Canada along with her parents and two sisters, but other members of her family were sent to concentration camps.