Thailand's army chief invited both sides of the political divide to talks after imposing martial law on Monday in response to nearly seven months of anti-government protests. 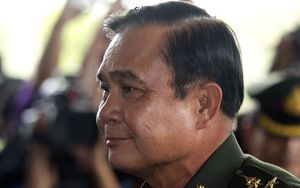 General Prayuth Chan-Ocha also urged pro and anti-government protesters not to clash and urged "all sides to come and talk to find a way out for the country".

General Prayuth pledged the army would take action against those using weapons or harming civilians, but added:

"Don't worry. Everything will still go on normally. We will try not to violate human rights too much."

The BBC reports the kingdom is bitterly divided between rural supporters of former premier Thaksin Shinawatra, who is in exile, and royalist supporters of the Bangkok establishment, who loathe him and want to end his dominance of Thai politics.

Thaksin was ousted by the military in 2006.

Acting prime minister Niwatthamrong Boonsongphaisan on Tuesday issued a plea for the army to act peacefully and within the constitution.

He has asked for new elections to be held on 3 August. 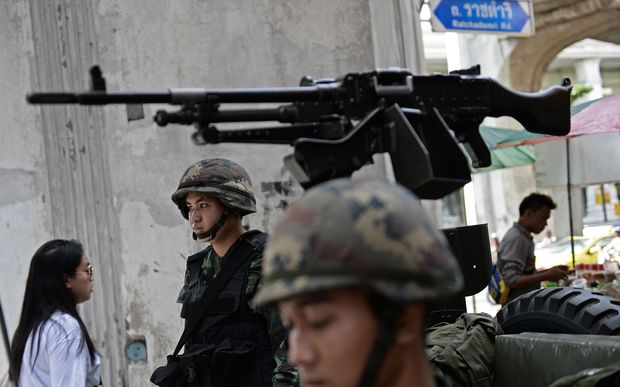 Thai troops at an intersection in Bangkok. Photo: AFP

Martial law was announced on television at 3am local time on Monday. The army cited a 1914 law that allows intervention during times of crisis but insisted this was not a coup.

The BBC reports the army has staged at least 11 coups since the end of the absolute monarchy in 1932.

Ms Yingluck called a snap election on 2 February that her party was widely expected to win, but it was later annulled. A court has since ordered her removal.