Other nations including Egypt, Jordan, Lebanon, the Netherlands, the United Arab Emirates and the United States have also recorded cases, mostly in people who had been to the desert kingdom. 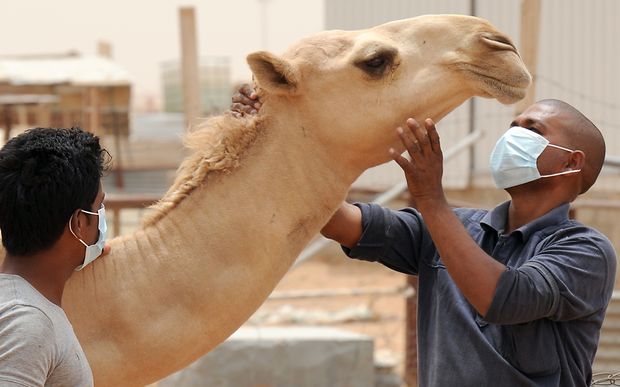 Workers at a farm outside Riyadh wear masks and gloves when dealing with camels to avoid spreading MERS after health experts warned the animal was the likely cause of the disease. Photo: AFP

The World Health Organisation carried out an inspection visit to Saudi Arabia this month and pinpointed breaches in its recommended infection prevention measures as being partly responsible for the spike in hospital infections.

MERS is considered a deadlier but less transmissible cousin of the SARS virus that appeared in Asia in 2003 and infected 8273 people, nine percent of whom died.

Like SARS, it appears to cause a lung infection, with patients suffering coughing, breathing difficulties and a temperature. But MERS differs in that it also causes rapid kidney failure.