Tension in the Solomon Islands capital Honiara had eased on Sunday, local people said, but the distribution of aid is still restricted. 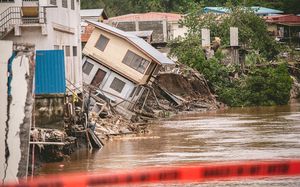 Buildings were set alight and a shopping centre looted in the capital Honiara in unrest on Friday and Saturday night. The disturbances were thought to have been started by victims of last month's flooding venting frustration with the authorities' response.

Albert Abeta, who was relocated to the Fopa evacuation centre after the flash floods in April, said the rioting was triggered by the refusal of Prime Minister Gordon Darcy Lilo to meet 15 people who had requested a meeting with him to discuss their situation.

Mr Abeta said it was only a matter of time before a riot occurred at the evacuation centres, because of evacuees' frustration.

Local people said on Sunday tension had eased, and with more numbers on the streets the police had better control of the area. Shops and bars had also closed earlier.

Ana Zarkovic, who is working with the Red Cross's water delivery programme, said although there were roadblocks on Saturday night, there were no major incidents. She said the situation was being closely monitored, and she hopes the full water distribution programme can resume very soon.

Another aid worker who did not want to be identified said their charity's distribution was still suspended in case staff were stopped at roadblocks and the aid was taken.