The captain and three crew members of the sunken South Korean ferry have been charged with manslaughter, reports say. 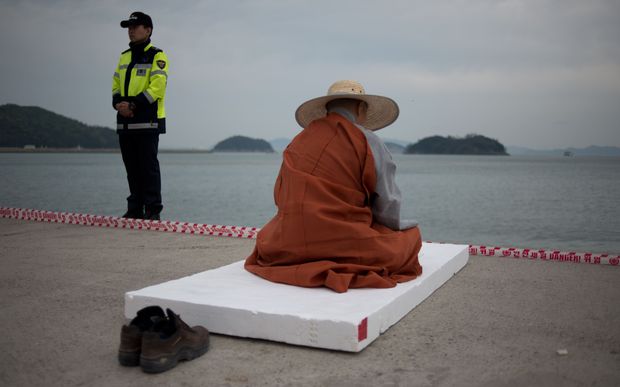 A monk offers prayers for victims of the Sewol ferry. Photo: AFP

Lee Joon-seok, 68, is accused of leaving the ship as it was sinking while telling passengers to stay put, reports Yonhap news agency.

He was among the first to be rescued by coast guards at the scene.

The Sewol ferry disaster on 16 April killed 281 passengers, most of whom were high school students. Another 23 are still missing.

Besides Mr Lee, three crew members - the chief engineer, the chief mate and the second mate - are also charged with manslaughter, the BBC reports. If convicted, they could face life imprisonment.

Prosecutors have indicted another 11 crew members for negligence.

Only 172 passengers survived the sinking of the ferry, including 22 of the 29 crew members.

The authorities have also arrested several people who were not on the ferry at the time of sinking.

These include five officials of the ferry owner, Chonghaejin Marine Company, and an employee of a private safety device inspection company.

The latter is suspected of conducting poor inspections of the ferry's safety equipment.