Trade unions in Turkey have called a one-day strike in protest and three days of mourning have started, following the country's worst-ever mining accident.

274 bodies have so far been recovered from the coal mine at Soma and around 100 are still feared to be trapped in what is likely to be the nation's worst ever industrial disaster.

Union leaders have complained that the privatisation of mines in recent years has worsened the industry's safety record. 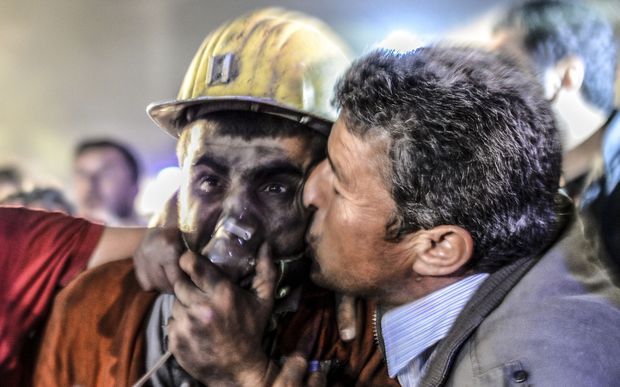 A man with his son rescued of the mine in which more than 250 workers have died after an explosion. Photo: AFP

Police in the Turkish cities of Ankara and Istanbul fired tear gas and water cannon at thousands of demonstrators who turned out to protest over the deadly mine explosion.

The demonstrators called for the government to resign.

There were also scuffles and stone-throwing in the town of Soma, near the coal mine, during a visit there by prime minister Recep Tayyip Erdogan.

He was booed as he emerged from his car. Some arrests were made amid the scuffles and pictures showed the prime minister, surrounded by bodyguards, seeking refuge in a shop.

Mr Erdogan has faced criticism on social media for being insensitive, after he cited numerous mining accidents throughout the world, including in Britain in the 19th Century, in defending the Turkish government's record. 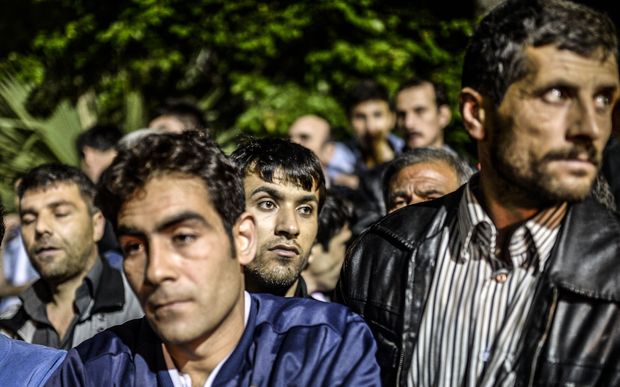 People stand in front of a hospital as they wait for news from their relatives. Photo: AFP

Nearly 450 workers have been rescued, according to the mine operator. However, more than 100 are still unaccounted for..

Eighty of those rescued had been treated for injuries, none of which were described as serious.

Energy Minister Taner Yildiz said 787 people had been inside the mine when an electrical fault triggered the blast soon after midday on Tuesday. Many of them died of carbon monoxide poisoning.

Fires were reportedly still burning in the mine 18 hours after the blast.

The electrical fault triggered a power cut, making the mine cages unusable. Those trapped are reported to be 2km below the surface and 4km from the mine entrance.