Results of the first exit polls in India's general election indicate a victory for an opposition coalition led by Hindu nationalist Narendra Modi.

The Bharatiya Janata Party dominated the campaign, but analysts warn exit polls have a mixed record in India and have been wrong in the past.

The main contest in the vote is between the Congress Party which has ruled for 10 years, and the BJP. Votes will be counted on 16 May. 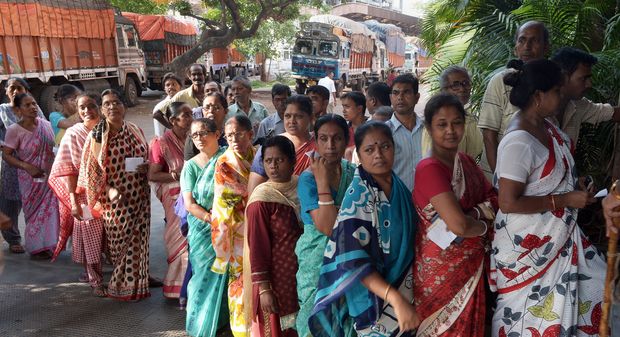 Voters waiting to cast their vote in Kolkata on Monday. Photo: AFP

The BBC reports millions voted on Monday on the final day of the election in Uttar Pradesh, Bihar and West Bengal states.

The election began on 7 April and has been held in nine phases for security and logistical reasons. There are 814 million eligible voters.

Exit polls released on Monday evening all showed the National Democratic Alliance, which is led by the DJP, well ahead in terms of predicted seat wins, and the Congress Party trailing badly.

According to the India Today-Cicero poll, the NDA is expected to win between 261 and 283 seats. TimesNow-ORG predicts 249 seats for the opposition alliance.

A total of 272 seats are needed to form the government.