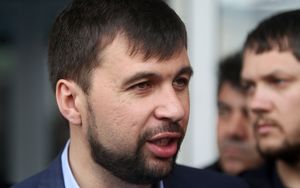 The government in Kiev has denounced the votes as a farce with no legal basis, but the separatists say they now have the backing of an overwhelming majority to start consulting specialists about joining Russia without another vote.

The BBC reports Moscow has not yet recognised their claims to be independent, but has called on Ukraine to implement the result of the poll.

Separatists in Donetsk and Luhansk say 89% and 96% respectively voted in favour of "self-rule".

Donetsk leader Denis Pushilin said that Ukrainian presidential elections, scheduled to take place on 25 April, would not happen in Donetsk because it was now "independent".

He added that he was not calling for Russian military intervention but that peacekeepers may be needed.

The region would switch to the Russian currency, the rouble, he said.

Meanwhile, the EU is imposing further sanctions on Russia over its actions in Ukraine.

Two Crimean companies and 13 individuals have been added to travel bans and asset freezes.

Russia said it expects the results of the vote to be implemented in a civilised manner, and called for dialogue between Kiev, Donetsk and Luhansk.

Later Foreign Minister Sergei Lavrov said there were no plans to hold further international talks on the crisis.