The latest attack by suspected members of Boko Haram in Nigeria has killed at least 125 people.

Police said gunmen rampaged through the town of Gamburu in the northeast, near the Cameroon border, on Monday.

Witnesses said they burned down houses and, in some cases, slit people's throats. A police officer assessing the scene on Wednesday said the death toll had reached at least 125. 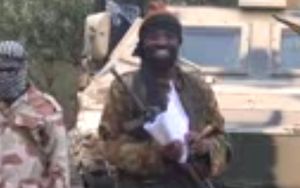 Police suspect the gunmen were from Boko Haram, a Islamist group linked to al Qaeda that abducted more than 200 schoolgirls in northeastern Nigeria on 14 April.

This week, the United States said Nigeria had accepted an offer of military and civilian experts to locate and recover the 200 or so captives. Britain is also sending a small team and France has also offered assistance.

The international attention has added to pressure on the government to show it is working to protect civilians. Police offered a $US300,000 reward on Wednesday for tip-offs, listing six phone numbers for anyone with "credible information" to call.

Boko Haram leader Abubakar Shekau has threatened in a video to sell the girls abducted from a secondary school in Chibok "on the market".

Public anger mounted after locals on Tuesday said another eight girls had been seized from the same remote area by suspected members of the group.

Last month's kidnapping occurred on the day a bomb blast, also claimed by Boko Haram, killed 75 people on the outskirts of Abuja, the first attack on the capital in two years. Another bomb in roughly the same place killed 19 people last week.

President Goodluck Jonathan welcomed the U.S. offer to send an American team to Nigeria to support the government's efforts to find the girls.

President Barack Obama said the kidnappings "may be the event that helps to mobilise the entire international community to finally do something against this horrendous organization that's perpetrated such a terrible crime".